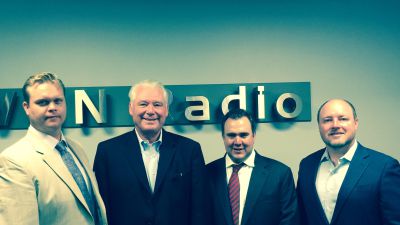 KATY LYNCH’S life can seem contradictory in many ways, but it seems to work so well for her. At first glance many see an all American woman, blond hair and blue eyes, but then this deep Scottish accent comes out of nowhere. As our conversation would tip-toe in and out of life, business, and hobbies phrases like “pork-pies” and “bang out of order” would throw me for a bit of a loop.

Talk to her for a few minutes and she can flow through a conversation with such enthusiasm and ease that you would assume she was born that way. It turns out it’s an adaptation that came from years of moving to city after city with her family and having to constantly start her pool of friends from scratch.

Asking her what she does for a living and upon hearing “social media management,” your reaction might be, “Oh. Neat.” After all, the current world of social media is plagued by profitless companies and campaigns, but not for Katy and definitely not for her new company SocialKaty.

SocialKaty was launched in August 2010 and works to bring Katy’s personality to as many great brands as possible. Through her own set of custom-built management tools she is able to monitor clients’ brands, interact with the community, track clicks and conversions, and deliver real value to her clients.

She isn’t doing it alone though. By her side is the founder of Where I’ve Been, Craig Ulliott, who upon hearing that Katy wanted to launch her own agency, quickly realized that he had to be involved.

“He knows how valuable social media is going forward. When he knew I was branching out and starting my own company, it piqued his interest.” And who was SocialKaty’s first client? You guessed it, Where I’ve Been.

Not only has Katy figured out how to make social media campaigns successful, her new company aims to bring a solid reputation and sense of trust to an industry that’s in need of real quantifiable results.

“When you hear social media, you think ‘everyone is doing it’. Someone opens a Twitter account, posts a single tweet, and starts telling everyone they are a social media expert. So many companies are now saying they offer social media services. I have worked in a corporate and startup environment and have been doing social media professionally for years. I can actually track the results, which is something most companies don’t offer right now.”

She feels that to make social media truly work, it has to be a natural extension of the personality of the business doing it. Social media is about connecting on a level that isn’t possible with traditional media. After joining Where I’ve Been in 2008 as its community manager she was quick to realize that to grow their base, they would need one central warm voice.

“The persona I created around Where I’ve Been was just an extension of myself.”

The plan worked. Where I’ve Been grew to a loyal and highly active following of nearly 70,000 Twitter followers who not only use it, but promote and spread their content far and wide. Where I’ve Been has been experiencing explosive growth and its revenues have mostly been generated by its social media presence .
Realizing that she was on to something, she wondered how repeatable her success was.

That thought gave birth so SocialKaty and her first entrepreneur experience. Having previously worked in a startup environment, she knew of all the challenges she would face if she started on her own.

“There were the same fears any business owner would have. ‘Is this going to work?’ You are putting your own money into it. You are putting all your time and energy into it. But I knew social media was only getting bigger and bigger. Social media is not a fad, it’s here to stay. The grand goal is to build SocialKaty into a large company.”

GROWING UP in Edinburgh, UK, life was quite conventional in the Lynch family.

“Very traditional. Little things like eating at the table. My dad would go to work, come home and dinner was on the table. Here in America it seems like everything is always on the go, everyone is busy.”

Both parents were quite laid back in their approach to parenting. The Lynch children would enjoy the liberty of staying out late and managing their level of involvement in school. “They just trusted us to do the right thing.”

It was her father’s work for GE that would eventually bring the family to America and give Katy her first taste of US life in Connecticut at the age of 12. The stark difference between life in the US and life back in the UK was something she sensed right away.

Not only is the way of life different, but being from Scotland brings a pretty thick accent with it. She doesn’t remember a day yet in America where it hasn’t been brought up.

“All the time. I can’t do anything without someone bringing it up. Maybe 20 times per day. It could be anything from ordering coffee at Starbucks to someone overhearing me on my phone on the L.”

But there is no plan to mellow it out or do away with it. She has found her accent to be the perfect conversation starter. Not too mention it would be at direct odds with her Scottish nature.

“Scottish people tend to be very stubborn and set in their ways.”

Even though she loved living in America, she felt Britain beckoning her home. Upon turning 18 she decided to attend University of Manchester in England and ironically majored in American Studies. She draws a direct connection between a class she took in psychology and her current work.

“I did a course in psychology and I loved it. I love knowing what makes people tick. I think it’s quite interesting know that I’m in social media now. It’s all about being personable and drawing people into your conversation.”

After graduating she moved just outside of London for a year and worked as a waiter. When I have chatted with friends in the past about their jobs as servers, the one thing they would typically list as the least enjoyable part of the job was the people. To Katy, that was her favorite.

“I waitressed in London for a year. I actually really liked it. It’s one of those positions where it really puts you on the spot. You get to meet all different types of people. You meet nice people, and people that aren’t nice to work with, children, etc… It’s fast paced and you’re balancing eight tables with eight different groups of people all at once.”

However, with her family back in the States and the fact that she had moved so much in her life already, the decision to return to America seemed just like one more move in a long journey.

“I decided that I wanted to move back to the States. I love it here. There is so much opportunity.”

When Katy lists off all the various places she has lived, I am deeply impressed with how well adjusted she seems. Moving from school to school throughout her life must have been a constant challenge.

“It kind of threw me in the deep end. It taught me to be a lot more outgoing. I think the reason I am outgoing is because of moving around so much. For my final year of high school my family moved to Milwaukee and I had to remake all my friends again.”

As far as why she has settled down in Chicago for the long haul, she loves the entrepreneur community she finds herself in here.

“I’ve lived all around. Edinburgh, Connecticut, outside St Louis, in Soho in NY, outside Milwaukee, London, and now Chicago. I find the people here are so friendly. There is a ton of potential here. Companies like Grubhub and Groupon have set the bar now. There are great companies here.”

Katy is in love with the entrepreneur community in Chicago. The only thing she hasn’t been able to adjust to yet in the States is our choice in beer.

“When I moved to America, I felt like everyone drinks Miller Light, Bud Light, Corona, Natty. No, if you are going to do beer, do it right. I’m a big fan Guinness and Boddington’s.”

VENTURING OUT on her own for the first time has been quite an experience. The stark contrast between the 9-5 at Where I’ve Been and having complete freedom to manage her own time has taken some getting used to.

“Social Katy is like my baby. I am very conscious to take care of it and monitor it all the time. There isn’t time to slouch around on the couch. There are always ideas and things floating around in my head.”

The switch from having a set schedule to having an internet-based business can lead to endless hours though; something I know all to well from my own experience. However, she has a very healthy approach to time management that we could all benefit from. There are no 24-hour-long work marathons.

“I never let it get that way or sitting by my computer 18 hours a day. In the morning I do most of my work, the afternoon is for meetings, and in the evening I switch off. It’s just not healthy to do that. You wouldn’t be productive working around the clock like that.”

Even taking that a step further, she has removed herself from the insanity of the Groupon offices, where she launched SocialKaty from originally.

“You walk in and it almost feels like no one is doing work. There are people running around everywhere and the ideas are flowing. It’s infectious. At the same time, it’s hard to get things done there because everyone is coming up to you and talking about ideas. I am one of those people that needs complete silence to talk to clients and think.”

She is going to need to keep her focus sharp to hit her goals for 2011. Not only does she hope to double her staff next year, she aims to at least triple her client base. Working at SocialKaty isn’t the typical environment though. You aren’t employee No. 4, you are an internet marketing ninja.

“They are my Social Media Assassins. That’s my term for everyone at SocialKaty.”

Their first target is to assassinate the notion that social media doesn’t deliver. She is quick to fire off multiple examples, but the one I found most fun was that of another fast growing Chicago startup called Foiled Cupcakes.

“Look at Foiled Cupcakes for example. She sells cupcakes through Twitter. She takes orders through it. Her entire existence has been powered by social media.”

Unlike Foiled Cupcakes, which wants to retain a small-business feel, she has found the size of her clients’ companies and their social networking goals can actually differ dramatically.

Next time you are in need of a Guinness-drinking Scottish social media assassin, look no further than Katy Lynch of SocialKaty.