Why Growth Hackers are Taking Over Startup Marketing

Why Growth Hackers are Taking Over Startup Marketing 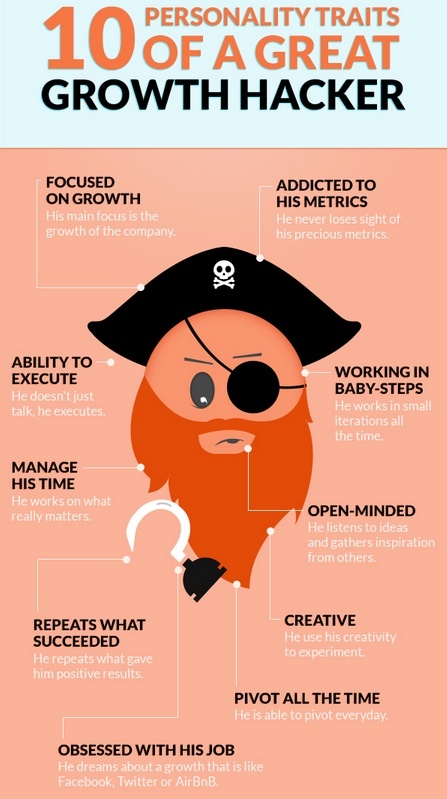 There are two primary reasons startups fail. The first is they create a product no one cares about, a solution that doesn’t meet a need for a large enough market. This is a problem the Lean Startup movement has been working to solve.

What is Growth Hacking?

Coined by Sean Ellis, a growth hacker is someone focused on creating scalable growth by manipulating and measuring each aspect of the customer funnel. The role of a growth hacker has risen to prominence in Silicon Valley. But finding one is difficult there, much less in other startup hubs like Chicago.

Growth hackers can be marketers, although they usually aren’t. Marketers often focus on using traditional methods to drive people to the top of the funnel. Marketers with direct marketing backgrounds are closer, as they focus on empirical strategies for conversion. And while any marketer can (and increasingly will) become a growth hacker, it’s a skillset that most marketers don’t currently possess.

Growth hackers are creative, constantly on the lookout for ways to increase acquisition, adoption, retention, revenue, and referral. They are disciplined, subjecting themselves to an empirical process to determine what works and what doesn’t. They understand that the product itself is the most effective marketing tool. And they are technical enough to leverage existing platforms to reach the billions of users at their fingertips.

Empirical creativity is probably one of the biggest differentiators between growth hacking and traditional marketing. Rather than trying to think his or her way to a “big idea” and building an entire strategy around around that idea, a growth hacker comes up with a dozen possible strategies, testing them on a small scale to see what resonates. As Jim Collins puts it, they fire bullets before firing cannonballs.

Growth hackers constantly come up with new and clever ways to move customers through the funnel. But their mandate is to find strategies that work at scale, not simply strategies that are clever. Every idea must objectively point to a sustainable improvement in growth in order to survive. Through A/B tests, cohort analyses, and other methods, they make sure they know what’s working and what doesn’t.

Companies who are serious about testing quickly learn that most tests fail. Which is why growth hackers also focus on the velocity of learning – they want to fail as quickly as possible. If you assume a 90% failure rate, and one organization runs one test a week while another runs ten, it’s likely that the second organization is going to move the needle much more rapidly.

A Recognition that the Product is the Marketing

When most marketers think of viral marketing, they think of creating unique, compelling content that spreads. And while this is accurate, it’s also very hard to do this on a consistent basis.

A much more reliable method for helping your product spread is to bake viral components directly into the product itself:

In all of these cases, the critical driver for user growth had nothing to do with a PR campaign or a clever viral video. The marketing and the product were not separate things – the product literally marketed itself.

This is one reason most growth hackers have both marketing and technical skills. Product and marketing teams are usually disparate, with the product team focusing on building features while the marketing team focuses on strategies it can implement without tech intervention. Growth hackers bridge this divide.

An Understanding of Platforms

Increasingly, the big success stories on the web leverage existing platforms to make it happen. Facebook, Twitter, and others have given startups tools to reach their millions (or billions, in Facebook’s case) of users in highly targeted ways. And, while having a solid social media strategy is important, growth hackers work to understand and leverage other ways of tapping these platforms.

Creating simple or seamless ways to push notifications into user’s Facebook or Twitter feeds is a simple example. Pinterest assumed you would follow your Facebook friends and auto-follows them on your behalf over a staggered period of time, sending you an email notification each time to re-engage you with the site.

Path constantly tweaks the way users invite their friends. It prioritizes people you’ve listed as “mom” in your address book, as well as the family members you’ve listed on Facebook. It asks for access to your custom friends lists in Facebook. It lets you create moments in your path stream and allows you to tag friends, who get notified via text and email (even if they aren’t currently a path user), driving them to a landing page with a call to action to join Path. It allows you to easily send reminders to people you’ve previously invited.

It’s not just major platforms. Growth hackers have learned that the efficacy of a particular platform tends to decrease over time as more companies leverage them. Being the first to implement a novel strategy in a new channel can represent a huge competitive advantage.

Tactics like these require a thorough understanding of the APIs these platforms provide; something most traditional marketers don’t or can’t do.

How to Become a Growth Hacker

It’s unlikely that you’re going to find a growth hacker to join your startup – there simply aren’t many out there. But, growth hacking is largely a mindset, and the skills necessary can be acquired.

You can start by reading blogs of the people leading the growth hacking charge – folks like Andrew Chen, Noah Kagan, Danielle Morrill, and Aaron Ginn. You can participate in the growth hacker boards on Quora. You can join the Chicago Growth Hacker Meetup, or a similar meetup in another own town or city.

The rest is all about trying things. Brush up your analytics and testing skills. Look at sites that have experienced dramatic growth and deconstruct what they did to get there. Learn as much as you can about the APIs of the prominent platforms. And then start firing some bullets.