Chicago-based startup Aegis AI is using technology to create a workaround that allows people to protect themselves regardless of what the government or anyone else does about gun control.

Essentially, the company’s AI software hooks into a building’s existing security camera infrastructure and automatically detects a firearm the moment it’s visible on screen. Building management and/or law enforcement is notified within seconds, with visual information on the suspect and their location. 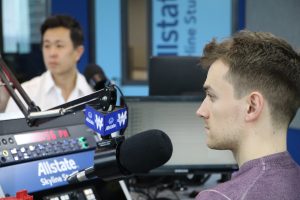 This gives security, police and other first responders critical information they need to neutralize the threat and render aid to victims.

Founders Sonny Tai and Ben Ziomek joined me in the WGN Studio to talk about how their game-changing tech can save lives.

From fear to empowerment

Scott: What made you realize that in order to prevent these violent acts, we needed to do something different?

Sonny: I’ve had a lifelong passion for the issue of gun violence. I grew up in South Africa, which routinely ranks in the top 10 of the world in homicides per capita. Johannesburg has 60 homicides per 100,000, compared to the United States, which has four. It’s basically 15 times worse.

Growing up, my biggest fear was a home intrusion. A family friend was fatally shot in his own home, and my mom decided to leave for a safer country. When I was 13, she took a job sponsored by an H1B visa, and we immigrated to the United States.

Although the US is safer country than South Africa, we have a mass shooting issue. Every time it happened, it would break my heart. I felt so powerless. I wanted to see how we could use technology to save lives during active shooter incidents. 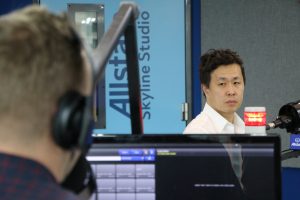 Focus on the “solvable”

Scott: What was the genesis of Aegis AI?

Sonny: I attended a training called Run Hide Fight, where teachers are taught to evacuate their students and resist if necessary. I talked with an instructor who was a career law enforcement officer and he said, ‘I wish all the security cameras we have deployed at this high school could automatically recognize guns and notify the police. That would be extremely helpful.’

I’d done research with computer vision algorithms that are increasingly more accurate than human beings if you train them on the right data set. I’d seen academic research papers theorized it was possible, but nobody was doing it.

Scott: It seems that the only way to solve this problem is to create technology that allows us to circumvent the political bureaucracy. That’s what you’ve really accomplished here.

Ben: One thing that we need to be careful about is ‘solving.’ Gun violence is a really complex issue, and we built Aegis from the perspective that there’s no one solution to this. 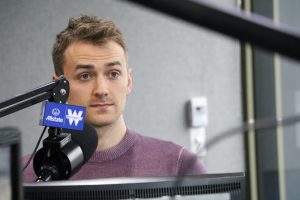 We looked at the most solvable aspect of it  –– the outcome that we can have an impact on: the time it takes for help to come. If you’re in an active shooter situation, your first priority, very rightfully, is to get to safety. It takes five to 10 minutes for the first 911 calls to come in. Police respond very quickly, but due to that lag, they arrive after the event is finished about 60 percent of the time.

We’re closing that loop and making it so that law enforcement can come more quickly, dramatically decreasing the impact of gun violence events.

Law enforcement response is often delayed not because they’re stuck in traffic, but because they arrive on scene and have no idea what the situation is. If you have a large building and you have no idea where the shooter is, what he’s armed with, how many shooters there are, is the shooter wearing body armor –– you’re really at a significant disadvantage.

Scott: That was the thing that stuck out to me. If I was a policeman or anyone who’s going to go into the line of fire, I would really like to know what I’m going into.

Sonny: As a former Marine Corps officer, I know that the effectiveness of an AR-15 type of rifle, compared to someone with a sidearm, is like night and day. You do not want to go to battle with a sidearm when your enemy has an M-4.

You always want to have as much information as possible. In the United States, most organizations we’ve engaged with already have the infrastructure. Something like 90 percent of schools in United States have security cameras. But the challenge is that it’s basically impossible to monitor all of these cameras. They just sit there and record. 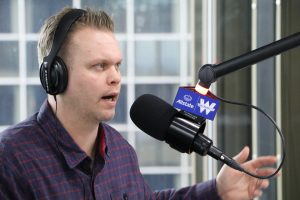 What we do is we take that friction out of the loop by allowing active monitoring of cameras in a resource-efficient way. AI strips out 99.9 percent of all the frames where nothing’s going on and surfaces the top priority, top threat frames for a human being to then analyze, then immediately provide that information to security or law enforcement.

Ben: I was at Microsoft for a number of years, and dealt with privacy compliance related to AI –– things like facial recognition. One of the priorities for us as we build this out is providing threat monitoring and  real-time intelligence without infringing on anybody’s privacy.

The cameras are already there. We store no customer data unless a gun is detected. We don’t analyze anybody’s facial features.

Scott: I think gun violence is the epidemic of our time. While it’s not killing people in the hundreds of thousands like cancer, it is destroying families across this country, and no one is doing anything. I don’t think anyone can because the government is not invested in it.

Sonny: The difference with cancer is we can plausibly claim that we’re doing everything humanly possible to solve the problem. We’re spending hundreds of billions of dollars, not just from the private sector but also from the United States and world governments, to eliminate this threat. But with gun violence in the United States, it’s so politically fraught, it’s so polarized.

Nobody can seem to agree on the actual solution. That’s why Ben and I and our team came together. We have a passion for this issue, but we want to sidestep the political debate. We have advisors and investors who own hundreds of guns, and they feel like this is a solution that can save lives but doesn’t infringe on second amendment rights.

Our mission is to provide a cost-effective, non-intrusive, reliable means of mitigating the threat that people on the right and left can all agree on.