From Two Guys to $100M: Six Scaling Tips From BenchPrep

From Two Guys to $100M: Six Scaling Tips From BenchPrep

When BenchPrep co-founders Ashish Rangnekar and Ujjwal Gupta uploaded their first app, a GMAT test-prep product, to the then-new App Store in 2009, they never imagined it would become a multi-million-dollar business.

In fact, they didn’t think of it as a business at all, evidenced by what they filled in under “Company Name” on the store’s developer application. Unprepared, yet inspired by the cocktail they were drinking at the time, they entered “Watermelon Express.” 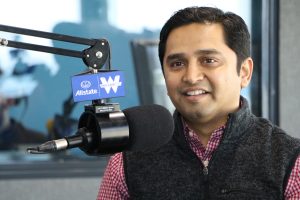 “For the first couple of years, it was just a project –– two guys working on an app,” says Ashish. “We weren’t figuring out the business model, how we were going to raise capital, or even what the company was going to be called. It was just the two of us trying to solve a problem.”

Ten years later, fresh from wrapping a $20 million Series C round for their omnichannel ed-tech platform, Ashish and Ujjwal are helming a team of 70 from an office in the Willis Tower.

A decade is basically a lifetime in the tech world, and many startups never survive the kind of complete business-model overhaul that BenchPrep pulled off. Here are Ashish’s top five lessons learned along the way.

In some ways, it’s a classic startup origin story: recognize a pain point and devise a solution. Ashish was a busy professional planning to apply to MBA programs. He was getting ready to take the GMAT when he realized there weren’t any viable digital test prep choices.

“The options that were available weren’t anything I was excited about,” he says. “I could buy a book for $20 and lug it around. Or I could spend $1,000 for a classroom program that expected me to be there every Tuesday evening. I was traveling a lot, and neither fit my lifestyle.”

Ashish partnered with his undergrad college roommate, Ujjwal, who was then a PhD student, to build a solution. They tapped a developer friend to help, wrote the initial test questions themselves, and launched GMAT Express, the first-ever exam prep app to hit the market. They quickly realized they had a product users craved.

Fast-forward to 2010: Watermelon Express raises $2.2 million in a Series A led by Lightbank. The next year, it rebrands as BenchPrep and goes cross-platform. By 2012, the two founders raised an additional $6 million after Ashish won a business plan competition at University of Chicago’s Booth School of Business. Their concept at the time, he explains, was a direct-to-consumer model based on selling individual test-prep courses to the public. 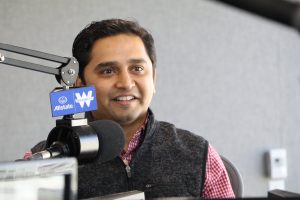 “We did that for four years,” Ashish says. “The second incarnation of the company, for the last four years or so, has been a B2B model. It’s only when we moved in this direction that things really started to work.”

“I almost feel like after 10 years, I’m already on my third startup,” Ashish says.

BenchPrep has been through its share of ups and downs, but he takes it in stride. “I look at companies around me that have succeeded. At one point in the life cycle of each, they had to pivot. Maybe it wasn’t their business model, but it was pricing, or how they manage their leadership team, or their brand. You can make a plan, but it always happens the way it was meant to.”

“We are on a mission to enable today’s education and training companies to digitally transform themselves so they can survive and thrive in the world of online learning,” says Ashish.

“Today’s modern learner is distracted. They get too many Slack messages, too many emails, too many texts. They’re impatient. They can’t watch a video longer than 10 minutes.”

Investors tend to be attracted to shiny ROI objects like blockchain or whatever else is hot in fintech. Organically grown concepts like BenchPrep risk being ignored. Ashish advises to follow your inner compass. 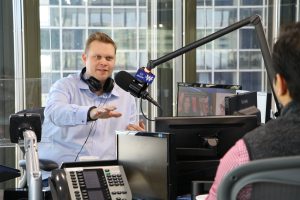 “If you look at the VC model, it’s to find the two out of 100 companies that are going to return investment to their fund,” he says.

“From an entrepreneurial perspective, it’s a bad idea to focus on what you think VCs would want to invest in. That’s the worst thing you could do. Things will go wrong. And what comes to the rescue is your passion. That’s the only thing that’s going to drive the perseverance you need to succeed in the long term.”

Today, BenchPrep’s trajectory is toward building a $100 million company. But the evolution from two guys and an app to an office in the sky was, Ashish says, “gradual in nature.”

“Everything I was doing in terms of recruiting, setting up strategy, building the management team, every conversation in the internal meetings  … my job was to make sure that everyone was aligned towards a $25 million goal. Once everyone started to see the value we were delivering to our customers, success started to happen around us. That’s when there was a lot of confidence. Then we started to tell the bigger vision –– what’s going to happen in the next five years, instead of just the next four quarters.”

“Very early on, I realized that I don’t want to be doing motivational speeches every week to rally the troops,” Ashish says. At the end of the day, a speech is great, but what happens when everyone goes back to their desks? Do they have a plan?”

The solution was to collaborate with his team create a set of guiding principles for the company.

“They’re untethered. They want things to be gamified and personalized to them.”

“You can use YouTube to learn how to make a pizza or be a Microsoft Excel guru. But you need to prove your mastery in your career.”

“I make sure that everyone –– management and board all the way down to a fresh- out- of- college employee, subscribes to them,” Ashish says. “Then they know, on every decision they’re making every day, whether it aligns.”