Nick Hamburger is a good egg. At just 21, he’s whip smart ready to scale his healthy-snack startup into the next big food brand.

Quevos is a snack chip made from egg whites. “It’s a combination of the words quick and huevo,” Nick says. “Spanglish for ‘quick huevos.’ Eggs on the go. They’re super high protein and lower in carbs than most chips. They’re a healthier alternative to conventional salty snacks.” 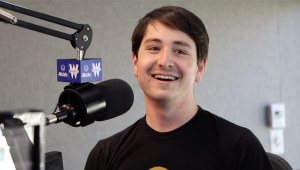 Nick founded the company last year with his best friend and high school classmate, Zack Schreier. As a Type 1 diabetic, Zack needs fast, high protein, low-carb snacks, so he cooked a lot of eggs. The two realized that the best part of an omelet –– the crispy, crunchy edges –– were “kind of like chips,” says Nick. “Right away, we saw the health potential.”

Their timing was perfect. In the midst of the keto craze, the concept skyrocketed from “WTF?” to “OMG, WANT.”

How did two Glencoe kids take Quevos from quirky idea to in-demand brand? They had to crack a lot of eggs, Nick says. Here are some highlights from our conversation.

Formulating the product was “a process of trial and error over many months,” Nick says. “We started in my kitchen, playing around with all sorts of different ingredients in the pantry. But pretty early on, we stopped using a skillet. Eventually we went to a pilot lab to do most of the development, because we didn’t have the equipment at home.”

He says the biggest challenge was figuring out how to make egg whites shelf stable. Although that process is under wraps, a quick look at the Quevos package reveals a refreshingly short, intelligible ingredients list. (Egg whites, avocado oil, pea protein and probiotic fiber are the first four). Flavors include “Quevos Rancheros,” BBQ and Cracked Pepper. The macros are a fitness fanatic’s dream: 10 grams of protein, 6 grams of fiber and 2 net carbs per 120-calorie serving. 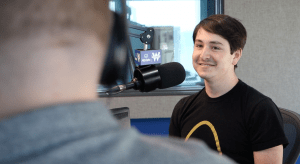 Conveniently, that’s an entire 1.1-ounce bag. That’s intentional –– after all, who eats just a handful?

“Halo Top was the first to knock it out of the park with how low calorie the whole pint was. In that vein, we want to be the healthier chip,” says Nick.

Quevos bounded onto the scene with the help of some great connections –– and plenty of hustle. “I was fortunate to get some advice early on from my neighbor (Andy Friedman), the founder of Skinny Pop,” Nick says. Friedman became an advisor on the company’s entry in the University of Chicago’s College New Venture Challenge. (Nick and Zack were both studying there.) “We spent the summer after high school and the summer after freshman year of college just dabbling with the recipe –– nothing too crazy,” says Nick. “It got serious when the school opened up the challenge to undergrads.”

The 10-week class was a crash course in startup success. They learned about everything from customer discovery (“every business needs to do that first –– make sure someone wants to buy your product”) to financial projections, pitching and aligning their vision with a healthy profit margin. It’s more difficult to do wealthy snacks, he notes, “especially when you’re using egg whites. It’s more expensive to produce than something like Doritos.” 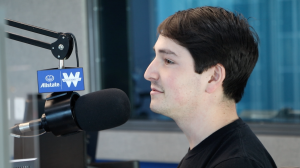 At the end of the challenge, Quevos earned the top prize, an investment of $15,000. “It was equity free, which is always great,” Nick says. “That 10-week process got us obsessed with the business. At that point, we were spending probably six hours a day on it, in addition to classes.”

Next, the startup was accepted into Kraft Heinz’s Springboard, an incubator program for food entrepreneurs. That experience came with $50,000, work space, and priceless access to CPG mentors.

The two founders are cashing their, ahem, chips in. In the tradition of Gates, Jobs and Zuckerberg, they’re dropping out of school to focus on growing Quevos.

There’s a huge advantage to being first on the scene with an innovative new food, so the company’s immediate goal is to “own the egg white chip,” he explains. “We’ve got a breakthrough product.”

Through 2019, the focus is on wider distribution, expanding from the Midwest to New York and L.A. markets. They want to achieve sustainable sales in 50 to 100 locations in each region before branching out across the country.

Scaling will allow Quevos to offer lower prices. “The process gets a lot more efficient at higher quantities. You order ingredients in huge bulk. In our case, getting eggs directly from a giant farm versus having to go through a middleman distributor will let us price more competitively within 12 to 18 months,” says Nick.

He’s optimistic about the future, even if it’s an eventual exit. “Obviously, we want to grow somewhat steadily,” he says. “But once you’ve proven it out within, let’s say, a Whole Foods context, then you take on Kroger, then you take on Costco, then you get into Starbucks. You just keep expanding. At that point, ideally, we sell the company and let a large CPG company worry about how to make it stay. That’s not our task.”

The company has ideas for future lines of higher protein options with an egg base, Nick says. They recently redesigned their packaging without the “egg white chips” description. It’s a smart move: branding egg white products as Quevos, like facial tissues are Kleenex.

Like a hard-boiled egg with a hairline crack, Quevos is blowing up. In fact, Nick arrived at the WGN studio without samples. “Three weeks ago, we sold out online, so we’re stocking back up,” he says. They’re launching a Kickstarter campaign April 4 at 12 p.m. CST with a goal of raising $10,000 publicly. “We’re expecting big things,” he says. “But internally, we’re hoping for a bit more than that.” He’s promising great discounts, especially for bulk buys.