3D Printing Since 11, Ethan Baehrend Made a Business Out of His Passion

3D Printing Since 11, Ethan Baehrend Made a Business Out of His Passion

The fanfare for 3D printers has ebbed and flowed over the years, but never quite breaking into the mainstream. A lot of this has to do with no true, flexible 3D printer product. Ethan Baehrend, an 18-year-old entrepreneur and CEO of Creative 3D Technologies, points to a stagnant 3D printing market that doesn’t have incentives for competition or to fill a space when they are comfortable in their own niche.

“For the most part everyone’s almost in their own market segment,” said Baehrend, who first got into the 3D printers at 11 making gifts for family and friends. “They’ll make, for example, a large format, three d printer, a big printer that can print big objects, but it can’t really handle other tasks. It will be able to print a big thing. If you want to print something new and tiny, that same printer won’t be able to handle it.” 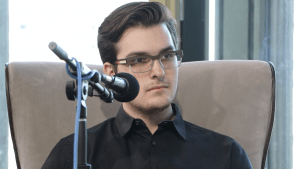 This frustration led Baehrend to start building his own 3D printing manufacturing company and a new printer, the CreativeBotDuo, that can handle a spectrum of objects from small to large for personal use.

With the creation of one of the industry’s first all-inclusive printers, one of the biggest barriers to consumer entry is “maker” education. Host Scott Kitun went back and forth with Baehrend about the problems with high school ed, the struggles to implement true STEM education and the lack of woodshop and carpentry classes with no modern day replacement (there are no 3D printing classes widely available). Baehrend, still a senior in high school, pointed to his own self-education that was the most obvious method available. He started with printing small gifts for family, then building computers, then refurbishing 3D printers, taking online courses and teaching himself to code along the way. With the support of his parents, Baehrend feels he effectively “homebrewed” his college education.

“I think the best way we can go about as society is to introduce people to as many sectors and fields as we know of and we have available,” Baehrend said. “And give them the opportunity to experience it, to learn if they love that or not.”

Listen to the podcast to hear the full conversation between Scott and Ethan on all things 3D printing, the maker space and beyond, sponsored by Bank of America and MB Real Estate.