Make Your Own Herb-Infused Oils (Yes, THAT Kind of Herb)

Make Your Own Herb-Infused Oils (Yes, THAT Kind of Herb)

My wife says I eat like a toddler. But as I gear up for fatherhood, I want to step up my culinary game. It seems as if there’s no shortage of kitchen tools on the market, from the ever-popular Instant Pot to blenders that can juice, chop and pulverize your iPhone as well as your morning smoothie.

Hobbyists can geek out even further with dazzling sous vide gadgets, homebrew kits –– even grow-your-own mushroom logs. (So I’m told: my favorite celebrity chef is Boyardee). 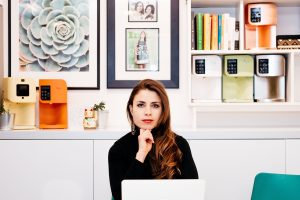 At the intersection of magical and practical is the LEVO, a touch-button herb infuser. With the power to create custom-flavored oils, butters, honey and, notably, medicinal products, it’s a plug-and-play appliance that appeals to DIY gourmets and everyday home cooks alike.

“You have to win a niche to become a mainstream product,” says its creator, Chrissy Bellman. “We’re trying to make infusion a thing.”

As LEVO’s founder and CEO, Chrissy has taken the concept from dorm-room conundrum to more than 1,500 stores nationwide. She called into the podcast for an interview on the genesis of her company, IoT versus analog and the importance of cultivating an enthusiastic community. Here’s her path to infusion profusion in five steps.

“We’re trying to solve the problem of oil infusion in general,” Chrissy says, explaining that traditional methods of doing it are inelegant at best. “Putting herbs in a mason jar full of oil and letting it sit out, using a skillet, loading a bunch of stuff in a crock pot –– all of these things lack temperature control, and they make a mess. And they might stink up your house.”

Think about it: infusing butter with rosemary or coconut oil with vanilla might not be a bad thing, scent-wise. But you might not want your neighbors to sniff out the fact you’re whipping up a batch of Salted Caramel CBD-Infused Truffles. (That’s just one reason why Forbes calls the LEVO the “KitchenAid of Cannabis.”)

There’s a natural-foods angle, too, says Chrissy. “If you’re buying premade products, they tend to have solvents and other additives that are hidden and not so desirable. They’re also super expensive. So we’re trying to make it more convenient by eliminating the mess, reducing the time it takes to do it, and making it more economical.”

Chrissy has had a longtime interest in “all the crunchy things,” she says. “When I was in high school, I started to get into natural foods, because I’ve always suffered from really terrible migraines. There are certain additives in foods, and even things in cosmetics that were bothering me.”

She was in college when she first saw the need for a better way to harness the power of herbs. “I happened to witness a bit of an infusion nightmare with people making some medicinal foods,” says Chrissy. “They were stinking up the entire place and making a big mess.

“I did some research and realized that oil infusion is common to homemade beauty and other foods, too. I got into the idea of making an invention for the generic oil infusion use case, one that covers so many different end products. I got obsessed with it.”

Which brings us to another key feature of infusing via LEVO — precision. “Folks care about controlling their ingredients for a variety of reasons: when making homemade medicinal product, holistic stuff or just healthy gourmet food,” says Chrissy, pointing to the infusion trend in restaurants.

“A lot of sous chefs are doing this. You can imagine the difference between a cake made with just canola oil, like the back of the Betty Crocker box might tell you, versus one made with Haitian vanilla-infused coconut oil. That’s how a lot of restaurants infuse flavor to make really awesome dishes.” 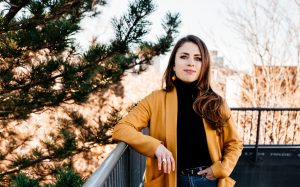 “We have consumers all over the map –– all different types of demographics and use cases,” Chrissy says.

Edible creations are just the beginning. Since the LEVO can infuse any herb into any oil, it’s popular with people who make their own beauty products. But she doesn’t see a play toward business just yet.

“We think more households could be doing what restaurants are doing and what stores are selling. Our focus is really B2C and empowering people at home.”

LEVO released its second-generation product, the LEVO II, in November. It’s a Wi-Fi enabled product inspired by customers’ feedback, she says. Community members who love to track their usage can access powerful tools.

But the company consciously avoids “me too” products, Chrissy notes. In other words, they’re not building IoT features just to jump on the bandwagon. “If our machine suddenly had zero buttons and you could only control it through the app, there’d be a lot of folks that would really struggle with that. It wouldn’t resonate with them. We try to keep things nostalgic.”

That means that the LEVO II features a range of retro colors and tactile buttons so users can eschew the app and go analog with ease. “We keep it agnostic,” she says.

For Chrissy, the Instant Pot is a great example of a product driven by content:  countless Pinterest boards and Facebook posts organically spread the gospel of the 7-in-1 cooker.

In that vein, Chrissy says that a key part of LEVO’s vision from the very beginning has been education, content and creating a community. The company’s website is a treasure trove of recipes, resource guides and guest blogs from cannabis-centric influencers.

“That’s what helps people really see the value,” she says. “We want to be a source of truth and a platform for a community that’s using the machine.”

She reports that early-adopter brand advocacy was key to LEVO’s rise, particularly in its pre-order campaign. “We have a lot of champions, and that’s been awesome. We pay homage to those folks and want to continue building that,” says Chrissy. “Our platform encourages them to generate their own content and share it with their networks.

“There’s definitely a learning curve and an education that needs to come with it. Once people have that, we see the usage and joy they get from LEVO go way up.”

Nurturing a community of users, she says, is a win-win. “We want to help them help us build community and content. That’s our number one request from customers: more content. Authenticity is key today, I think.”