How does a big corporation with a 160-year-old brand invest in the future?

Milwaukee-based Northwestern Mutual spends a lot of time and resources building its entire brand around people. At the same time, we’re in a world where tech is central to just about everything. How do they innovate while still putting people first? 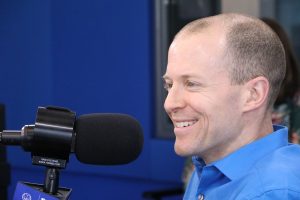 Here’s an excerpt of my conversation with James Hischke, the company’s Senior Director of Tech Advancement and Outreach, about how the venerable financial services company is shaping the tech ecosystem in our neighbor to the north.

Corporations have people, too

Scott: I obviously love startups. But I think we also need people to work on big problems in big places. How can you attract talent at a corporation –– people who might rather strike out on their own?

James: That’s a big part of what we’re trying to do. There’s a mindset in the culture of places like Milwaukee, Pittsburgh, Indianapolis, and to some degree even Chicago, that large corporations still aren’t getting it, as far as the need to get involved in the startup community, get in front of American emerging technologies and stop operating behind a curtain of silence that separates them from the rest of the world.

Scott: Is it because large corporations are like a big boat? It takes a while to turn it. So not enough people can work on the coolest, sexiest things. A big company probably pays me better than I’m going to make on my own, but I don’t get to work on cutting-edge stuff.

James: That might be part of it. But Northwestern Mutual is pretty unusual from that perspective. We’ve gone through a transformation. When I started there, if you’d worked less than 15 years, you were looked at as a baby. Now, about 50 percent of our employees have been there less than five years. So there’s been a pretty significant shift in the talent makeup of our company. 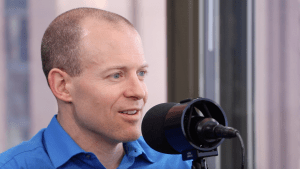 Three years later, it was bought out by Wells Fargo. I ended up going to Northwestern Mutual and stayed there. I realized my previous employer was a flat company with very little internal movement. At NM, every two to three years I have a new job –– almost a new career. There’s a lot of opportunity that many people don’t see.

Scott: Some companies are sluggish and stagnant. They’re not trying to improve their processes. Why and how has Northwestern Mutual continued to innovate?

James: We really value our people and invest in them over the years. As a financial company, it’s about being able to serve your clients, to provide them an experience that provides value. It’s all based on the employees who enable us to do that.

While I’ve been there, I’ve gained tons of expertise. I really understand the market, the company and its value proposition. That sets me up well for thinking of new ideas and opportunities. Also, we’ve had a long history of internal collaboration across departments, which enables reinvention to happen.

In the past, we’ve done that from a process and product perspective. For the last four to six years, we’ve started to look at technology.

Pretty fly for a corporate guy

Scott: I’m reading Jim Collins’ The Flywheel. He talks about how the death of the funnel as a marketing tool is fast approaching and being replaced by what he calls the flywheel effect. The previous funnel model was always, I have product, I can build more product, I’ve got marketing, I’ve got sales, I can sell people stuff. And the customers are at the bottom of the funnel. Use your creativity for a moment –– it’s not a great image of a big company’s excrement landing on––

James: Stuff dripping out of the bottom onto the customer.

Scott: I know –– it doesn’t look good. What works is putting the customer dead center, in the middle of the flywheel, and everything I do brings value to them. The more customers I have, the more value I can bring to you, and so on, and so forth. How do you take the ethos the brand was built on 160-plus years ago and convert that into the way that your tech is built, so the people and the tech work together?

James: In the early 2010’s, we had a new CEO who was really growth focused, looking to take this company to the next level … We started undertaking a lean process transformation on our business operations side. At the same time, we had an agile transformation on our technology side. There were years of significant change culture change along with that, too.

Around 2015, we started looking at how technology was disrupting every aspect of every business. And for our clients, the Amazon-like experience is now expected across every industry.

James: Exactly. Now we have to integrate technology into the core of how we’re going to operate, not only in the value we’re creating but how we’re delivering that value to our customers –– the experience around it.

Scott: Tell me more about that.

James: As an insurance company, it’s all about managing risk and that driving how your balance sheet works. Now we have to flip that mindset and invest in technology, which always has some degree of risk.

We acquired a fintech startup, LearnVest, that’s focused on financial planning for everybody. At Northwestern Mutual, a lot of our customer value is driven by folks with larger portfolios who can afford higher levels of insurance. We were trying to figure out how to approach a different market and serve more people in a way that positions us at the center of their financial lives.

For the last few years, there’s been cultures colliding: a fintech startup and a traditional financial services company. It’s a transition toward technology shaping us, while still staying true to our core strengths. 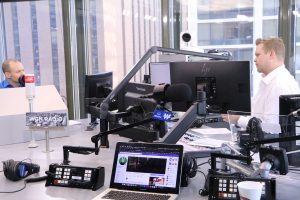 Do the local motion

Scott: A lot of companies could learn from getting involved in the local tech ecosystem or being a contributor to building one. It’s the most valuable investment you can make. It’s future employees and customers, but it could be the future model of your business.

Deploying a bit of capital to invest in a company at the seed stage, or to be a part of its IP, or give them space … most companies, industry agnostic, believe that investing in the ecosystem is slapping their logo on a wall, throwing some cash and leaving. How does Northwestern mutual strategically decide how to get involved?

James: Northwestern Mutual has long been a huge part of the Milwaukee community. It’s a microcosm of the community in general, a sleepy old giant with a traditional background––

Scott: A whole lot of fun, though.

James: Yes. Well, I give a lot of credit to the senior leadership. We’re extremely committed to the Milwaukee community, long term. Being a catalyst for the local ecosystem was the right approach. I was asked to lead our involvement.

A lot of it’s trying to figure out: What can a company like us do? Where can we get involved and make the most impact? There are two big things we’ve tried to do. One, find really great organizations that are already doing these things. Help them broaden or deepen the impact that they’re having.

Two, what gaps are out there in the ecosystem? How do we fill those gaps with stuff we can create, or what we help other people create?

Scott: It seems like the Milwaukee startup scene has only started to make measurable leaps and bounds over the last like two years or so. I remember hosting Technori events in Milwaukee in 2014, ‘15, and ‘16. It was a challenge. Now it’s a new place.

James: We’ve been at this for a long time. But the focus really started in 2017. Prior to that, we had a focus on innovation but I don’t think we looked at ourselves as a catalyst for really growing the ecosystem, both for Milwaukee’s future and our future as a big business within the city.

We want to grow the digital tech talent pool for Milwaukee and NM’s share of it. So I embedded myself in the community and quickly understood that this isn’t just about trying to attract, build and retain talent.

That talent really needs a thriving innovation ecosystem, both to attract younger generations, but also to keep folks who’ve become industry experts around.

Scott: How are you involved in gBETA?

James: We rounded up other organizations in the Milwaukee community to sponsor gBETA for the next two years. It’s a non-dilutive, early-stage startup accelerator owned by Generator, based on corporate sponsorships. It leverages those corporations for mentorship, first-customer networks and those kinds of things. We’ve been a leader in getting community support and involvement around this programming.

Scott: What are some of the things that you would like to see Northwestern Mutual continue to build upon?

James: Northwestern Mutual’s leadership in the Milwaukee community in the tech/startup ecosystem is definitely having an impact. We rolled out the $5 million Cream City Venture Capital Fund, focused purely on companies in the Milwaukee region. Our partner Advocate Aurora Health did the same with the Invest MKE Venture Fund.

We invested in seven companies in 2018. While we’re not a lead investor, it’s still influencing term sheets and it’s still having an impact on the environment. We opened Cream City Labs last year, too. We offer space for the first year to startups our VC fund invests in. They also get access to our mentorship and technology expertise, get connected to our financial reps across the country. Three companies we’re investing are located in the labs, and they’re all seeing a benefit.

In the future, we’re looking to fill in funding gaps –– the Series A kind of stage. We don’t have a lot of investors looking to be the lead in that space. Plus, there’s space for, mentorship and more formal structure around early-stage entrepreneur support.

Scott: What would you like to see entrepreneurs do with regard to big companies? Often there’s an antagonistic relationship. But we can be partners. How can both sides do better?

James: There’s still skepticism and cynicism: hey, this big, large corporation is trying to take over the community. We ran into that a lot when we were first spreading the word about the Milwaukee Tech Hub movement.

I say, be open minded. Be willing to leverage the strength of a corporation and trust that we’re really doing it for the right reasons. Everybody’s in it to improve their business.