When Jay Klauminzer was 14 years old, he got his first job selling magazines over the phone. He says his main takeaway from those early days is that to be successful, you have to be a good listener.

“A lot of sales is about listening to what the consumer needs and crafting a story around it,” he says. 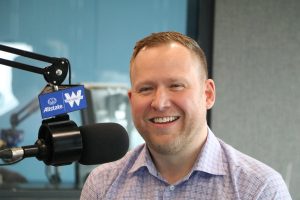 Jay continues to apply that lesson today as CEO of Raise.com, an online marketplace for buying and selling gift cards — a rapidly growing multi-million dollar market. Through Raise’s app, customers can immediately load and store gift cards electronically, so that they’re never buried at the bottom of the sock drawer again.

As a former VP at Doordash — and a Groupon guy before that — Jay has continued challenging himself since joining Raise in 2018. Under his leadership, the company has shifted its focus towards becoming a “wallet for gift receipts,” where customers can use their credits as currency. Jay joins us in studio to discuss Raise’s developments since he took the reigns.

Jay says that in its early days, Raise functioned as a gift card marketplace for the many, many people “who have lots of unused gift cards sitting in their desk drawer.” Raise.com was a place to get rid of them.

“You would go on and make some money for your unused gift card,” says Jay. “And people like you and I would save money in the process.”

Jay was impressed with Raise’s underlying technology, but he believed the company needed to focus its narrative to target the right customers.

“If we didn’t get that right and we weren’t able to acquire customers, then everything else didn’t matter.”

Raise-ing the bar for customer acquisition

Though Raise was growing rapidly, Jay says the company’s turning point was when they “started to be a real acquisition platform.” Their success caught the eye of retailers who recognized Raise as a channel for accessing new audiences.

“We started to actually have lots of customers that these retailers wanted,” he says. 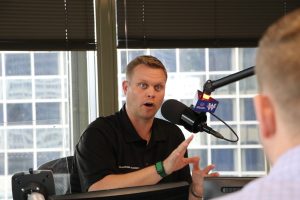 Under Jay’s leadership, Raise shifted its model to prioritize “direct relationships” with over 500 retail partners. Together, they partner to sell gift cards directly to customers. It’s proven to be a win-win for both retailers and customers, offering them a convenient shopping platform.

“The beauty of our marketplaces is that there’s now one app where you can play with 500 direct retailers, one app and you can pay in-store immediately,” says Jay.

“Retailers see gift cards as an acquisition to retention channel,” says Jay. “It’s about how many consumers can we get this in front of and how many offers can we get to them.”

Jay also says that a major benefit of using gift cards is that “it’s a closed loop,” since payment information is already stored in the POS system.

“I know exactly who that consumer was and what they bought,” says Jay. “That’s obviously the marketing panacea of what retailers want to work with.”

From Groupon to DoorDash, Jay’s entire career thus far has involved building the next big thing — with great success. But Jay doesn’t let it get to his head.

“My entire career as a growth seeker, I always had feedback,” says Jay. “I would welcome it and I would work on it.”

Now as a CEO, Jay creates work structures to continue receiving steady 360 feedback from his teams. The goal, he says, is to always continue growing.

Jay creates structures in his own life, too, to ensure Raise keeps its eye on the prize. Despite his busy schedule, Jay blocks out an hour each morning to sit and reflect on the company’s progress. He also stays on task using the OKR (Objectives and key results) framework to rank his priorities and track whether Raise is “skating where the puck is going.”

All these methods, he says, are to eliminate distractions that might prevent Raise from reaching its end goal: boosting profitable traffic.

“Everybody from leaders to employees is forced to think through where we need to be as a company,” says Jay. “There’s no ambiguity around what they’re working on and how it impacts the company.”