When Dana Todd decided to do a major wardrobe update, she had no idea she was about to hit on the idea for her next business.

Dismayed with the availability of fashionable options for women who don’t fall into the very young or very thin categories, Dana saw an opportunity to offer custom-made clothing for a variety of body types.

That’s how Balodana, an online marketplace for women’s clothing, was born. It sells made-to-measure wares from designers around the world at prices comparable to traditional retail.

Balodana CEO Dana Todd joined Scott Kitun in the WGN Studio to discuss her entrepreneurial journey and how it led her to lead a fashion startup. An edited version of the conversation follows below.

Scott: I’d love to know your background before we dive into your company. What brings you into this?

Dana: I will first confess that I did not start off in fashion, although I have always loved fashion. When I was a kid, I never entertained the idea of having a career in fashion. That was not something that we could do. 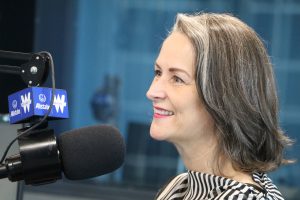 Scott: Why not? I hear this from other people that they thought fashion isn’t something you can do as a career.

Dana: It’s a huge fallacy. And actually I never thought about it until I got into this industry. I really just fell into this and started researching it about three years ago. I had an advisor who said, “You wouldn’t believe what a gap there is of people who are doing the technical jobs, programming and all the work that’s needed.” There’s a huge innovation opportunity here.

And that’s when a light bulb went off and I realized that this is the thing that could potentially keep girls in STEM careers. They’re told that it’s fine to draw pictures until you get to be of age and then you go have to go find a real career. But the reality is that those are significant real careers. There’s a huge buildup of need right now for women, men, and anyone to come in who had technology backgrounds to come in and create innovations in this space.

Scott: Tell me a little bit more about your story.

Dana: First of all, Balodana is my third company. My first company, SiteLab, was a digital agency in San Diego that I ran with some partners there and we made some of the first websites on the internet. Like my first website was a million dollar website and it had all the best bells and whistles that were available in 1996. I mean it was a big deal back then. I started out in digital product development and built my career in digital marketing. Before Google was anything, we were creating the space for digital marketing and trying out everything.

I’ve had an entire career of nothing but innovation. My second company, which spun out of SiteLab was called Newsforce. And at the time, the options for monetizing news were very limited online. It was banner ads. So, we invented an ad tech play that was specific for news. And our vision was to bridge the gap between the public relations industry, news releases and more by utilizing that as content to drive readers to sponsored content and feed them through our ad funnel.  And we were doing awesome. 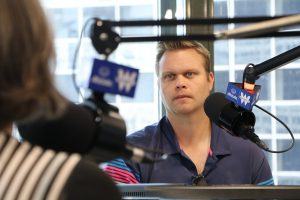 We had over 500 newspapers across the U.S. who were carrying our system. Then the recession happened in 2008 and all innovations stopped for about two years. We were bootstrapped with a little bit of angel friends and family, and we didn’t get our first institutional round.

So to be honest, it really hurt as an entrepreneur to put so much into that six years designing the system to see success right in your hand. And just have to shut it down.

Scott: How does that help you to get to this point where you decided to go into retail and do things differently?

Dana: After we shut down Newsforce, I did not immediately run out and start my next venture. In fact, I limped over and took a corporate job and thought that was going to be safe for a while.

What I found is that I really missed being an entrepreneur. And then in reality, that as a chief marketing officer, my life and career was no longer stable. It’s a total joke with the CMOs. We used to sit around at the CMO club all the time and just laugh about things like, “Hey, you’re on month 13, how’s that?”

I realized in about 2015 that I wanted another venture and I had another one in me, but I honestly had no idea what the business model was. So I had a leap of faith that I was going to do another business and I set up the legal name of the construct.

And then I felt very strongly in 2016 to see what my natural hair color looked like. It was such a big deal for a woman in tech to allow herself to look over 40. But one thing that happens when you change your hair color radically is that, you have to change your wardrobe.

I was 54 and I was freaking out a little bit inside because now I had taken away my Superman cape of red hair and purple hair and I couldn’t wear suits anymore because if you have gray hair and wear a suit, you’re definitely not in touch with what’s cool.

And so I realized I needed some cool clothes. So I started looking around for cool clothes, but the only cool clothes were made for incredibly young and thin people. They didn’t have sizes made for a menopause body or what my friend calls her “hamster body.”

So I did find this really cool Romanian designer on Etsy who does all this edgy streetwear stuff. They’re all very young styles, but not inappropriate. They’re just amazing structures and very creative styles and could be made to measure.

I didn’t even know you could do that. In this country, we’ve forgotten that actual humans sew clothes from beginning to end. Women have been so cut off from the process that we don’t know what size we really are.  We don’t know how things are made. We don’t have an awareness of the construction and the quality that goes in.

So when I discovered there was a workaround, I thought it was awesome. But I didn’t like the experience on Etsy. I realized it would be so much better if there was a special mall where everything was made-to-measure. And if there was a centralized profile that would remember who I am and let me put in my preferences and still allow me to have this kind of relationship with these dressmakers all over the world.

That’s when the light went off and I went — bam! — that’s my next thing. And it was perfect because that’s what I do — I create customer experiences.

Scott: So what was the big “aha!” moment when you realize you’re going to be legit?

Dana: It really clicked for me when I started running the numbers and asked, “How can I scale this?” I started talking to women and asking them, “Have you ever had a custom made dress? How would you feel if everything you could get was custom made?” And I got nothing but overwhelmingly positive responses. In fact, many of the women in the 40-plus range actually remembered what it was like to be able to get good quality clothes and to have things made to measure.

So with all the research that I did, every box was checked. I realized there’s a ready market here. There’s an actual need. I flew to Romania and actually met the lady who made those clothes from Etsy.

Dana: I wish it was quite that easy. One of the very first things we did was look around for a ready-made solution. These days in e-commerce, no one really does custom development much anymore. But ToMarketplace is actually much more complicated than I expected. So we found a partner in Canada that’s been doing marketplaces for 20 years with a hybrid SaaS that they built.

We didn’t start laying code until last July. So we had a very fast development cycle. We didn’t get out everything we wanted but we were live the day before Christmas.

There was a lot of working parts and a lot of training. For a lot of merchants and designers, English is their second language so we were doing a lot of heavy lifting to onboard them.

I’ll confess that in the first 60 days, we only got a few sales and they were all from people I know. We found that the assumptions we had made around the e-commerce acquisition were different. Everything looked like e-commerce except for one big, missing piece: the measurements. That is literally the biggest obstacle.

Women are afraid of measurements. There’s a 50-year-long history in manufacturing and branding that has systematically destroyed any standardization whatsoever in sizing.

The intention behind working with a good tailor is that you’re going to buy something that should last you way longer than your typical fashion cycle, if not the rest of your life. I heard that Prince Charles has all of his jackets and suits mended, and he’s really had these clothes his entire life. 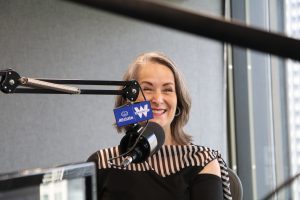 Scott: And so you’re trying to get people to come back to you because they’re putting on your clothing and it makes them feel good.

Dana: Exactly. Women are trying to navigate what life is like as a professional and how to find good looking clothes. So part of it is the fit and part of it is the quality. Our current system doesn’t allow any customization in terms of the fit. And you have diminishing quality because of the margin pressures that are placed on the supply chain.

So now you have a situation where somewhere between 10 percent and 25 percent of the garment tag is what went into production, including material and labor. The rest is tariffs, taxes, shipping, marketing, and all those other costs.

What happens in our model is that we take a 20 percent commission off the top and it’s really the reverse of the standard model. That other 80 percent goes directly to the maker so they can buy better cloth, they can spend more time on the clothes, they can customize, and they can give their workers a living wage and benefits.

Return culture creates a lot of waste. Lots of clothing is being dumped off in Third World where it disrupts their economies as well. It’s being burned by the billions of pounds per year. The result is that every woman in America — no matter where she goes to shop — can only buy China-made goods with an incredibly reduced margin.

Scott: It’s really interesting — there are marketplaces for a million things, but not for women’s clothing. Where do people go to learn more and how does one go on and start shopping?

Dana: Well, first of all, it’d be nice if you had your measurements and you can literally have a friend do it or go down to your local dry cleaners and they’ll do it for free in most cases. And then fill it out on our website.

We have 12 merchants live on the website now, covering close to 800 different items in rotation. We intend to have thousands of garments that women can ultimately buy. They range from as low as $50 to premium clothes from our London suppliers for around $1,000 for a blazer that you’ll hand down to your grandchildren.