Craft Whiskey in the Mail? There’s a Subscription Box For That

Craft Whiskey in the Mail? There’s a Subscription Box For That

Craft whiskey used to be the exclusive domain of snobs. That was the perception, at least. Think of a person who nerds out on craft whiskey and you might fall asleep at the very thought of a lecture on tasting notes and aging processes.

But that’s not Dannie Strable, co-founder of RackHouse Whiskey, a subscription box that promises more than just a different drink every month.

Instead of getting into the whiskey-tasting weeds, subscribers learn the stories behind the small, often family-operated distilleries provided in each box.

Dannie openly admits that he was a whiskey novice up until very recently. Before he got into the whiskey world, he was a college baseball pitcher who switched to science after his dreams of going pro were dashed. It was another career change, to a job in media, that inadvertently lead Dannie to his first distillery.

Just under a year after RackHouse Whiskey’s first box landed on their earliest subscribers’ doorsteps, Dannie dropped by the WGN studio, where we talked about professional pivots, bringing whiskey to the web, and the power of a really good story.

Scott: Walk us through that moment when you were done with school and instead of playing baseball you were like, I want to do something different — walk me into RackHouse.

Dannie: I was devastated when my baseball career was over; playing professionally was my goal. Things didn’t fall my way. I did not have a clue what I was going to do, but I got a degree in science and I actually went into the medical field, working for a nonprofit in organ and tissue donation. Very long story short, I got interested in the media world and met certain individuals through that. And we ended up visiting a very small distillery in this middle-of-nowhere place called Weeki Wachee, Florida. 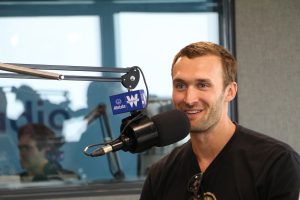 I saw how they were carrying grain across their land, and grinding it up on a mill that was powered by a creek next to their house. Before I got there, I tried their whiskey and I thought, ‘That’s just whiskey.’ It didn’t taste any different than any other whiskey I’d had in my past. But after I met the individuals that owned it, after I saw the grain in a wheelbarrow, I tasted it again, and I was aware of something that I didn’t have beforehand: it just tasted better to me. So I asked myself, ‘Why in the hell is that? Nothing’s changed. This is the same whiskey.’ And it was because of the story. I knew more about it at that point in time, I got to experience something and understand something I didn’t understand before.

I started looking for videos, documentaries, stories on other distilleries throughout the country. And I couldn’t find anything. Big distilleries do a good job, but nobody else was doing that. I found out that these smaller distilleries can’t afford it. It’s very expensive to run a distillery, we’re talking millions of dollars just to start, so there’s nothing left over to spend on marketing.

I started thinking, ‘How can we get that into people’s hands?’ It took a long time; to be honest with you, I was on my last leg. We finally developed a model and created some amazing partnerships in order to make it happen. So now what we do is, we go to these distilleries, we film and tell the stories. We will negotiate a bottle price that works within our price range in our model, where we can ship it across the country and get it in people’s hands that never would have heard the story before.

I don’t think people realize some of these stories that are out there. I mean, there are NASA engineers out there making whiskey.

From bootleggers to the web

Scott: If you were to follow the stories around whiskey from the start to today in this country, you are a part of every major historical event in the United States. 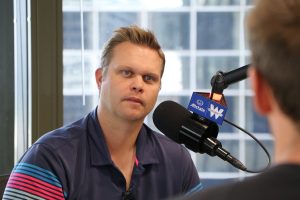 Dannie: Yeah, absolutely. That’s a great point. We’re trying to pull those out. There’s a whiskey boom right now, especially in ‘craft whiskey.’ It’s like craft beer had its time —  it still is — and now the whiskeys are having their time. We couldn’t give a shit less about tasting notes, to be honest with you. I’m saying that publicly because I think people get so wrapped up in that. There’s a place for it — I love that certain people have a palate to do that. But for people who are just getting into it, it really doesn’t matter.

We focus directly on the story. Stories will last forever. We want people to get the box and then when their friends come over, they can tell their friends all about the whiskey, that’s what it’s all about. We started a media agency on top of this. We’ve collaborated with some very unique tech companies in order to sell whiskey directly online, which has never been done until now.

Scott: The bootleggers would be rolling in their graves.

Dannie: I suppose so — you can go directly to a distillery’s website now, the ones that we’re working with, and buy from their website. Beforehand, whiskey distilleries didn’t need a website. You’d go there and see some nice pictures, and maybe a video, but does it do any good for a Florida distillery for somebody from Seattle? It was hard to have a true online ecommerce business until now. It’s another model for us to ultimately help distilleries, and obviously create a business out of this as well, which has been very successful so far.

Scott: You guys are in a really good spot then — the changing tide that I’m watching, I see it pushing in your direction.

Dannie: I hope so. Obviously we’d love our subscription box to take off, and the more people who get a box in their hands, the more people that learn about these distilleries. We’re equally in it for the distillery itself, to support them and support the craft whiskey community. It’s a very small community, everyone seems to know each other. If we had worked with the first three or four distilleries last year and were just a bunch of cronies, we would have been out of business a long time ago. But we’re actually helping distilleries, because we had distilleries help us build our model. 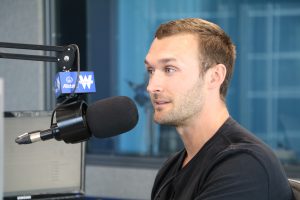 I came from the outside and I reached out to individuals who do know what they’re talking about and have done it for a long time, from distributors to distilleries, to the management side. That’s how it all started, asking these individuals who truly care about their industry, who truly care about their art and craft, ‘How do we do this? How do we make it successful for you and us as a business?’ This pie large is enough for everybody, so let’s do it to support everyone and each other.

Dannie: My favorite smaller craft that I’ve had so far is from Iowa — Legendary Rye, it’s called a private reserve rye. It retails at about a hundred dollars. It’s just so smooth. I’m the kinda guy that likes a little bit of a bite but not too much. Something that is not too overwhelming, and that you can sip on without even needing ice.

Scott: I’m that guy where I start off with a glass, and then you put a little bit in it, and I take a sip and if it sucks I pour Diet Coke in it. Either way it doesn’t matter.

Dannie: That’s right — that’s what you should do. I want to start doing the same thing.