Chicago wasn’t built in a day, as the saying nearly goes, reminding us that everything worth doing takes time, patience and unwavering hard work.

Stuart Frankel learned that lesson over nearly a decade of experience. In the nine years since he co-founded Narrative Science — which creates software that translates headache-inducing data into useful information — he’s watched the market slowly catch up to his way of thinking. The company itself has evolved too: after getting their start with software that turned baseball scores into stories for reporters, they’re now best known for report-writing product Quill — at least at the moment.

In 2017, Narrative Science raised $11 million in a Series E round, bringing their total funding up to $43.4 million. While Stuart, the CEO, is modest about this sum, it’s clear from our conversation that he’s eyeing the future with optimism. He returned to the WGN studio, where we talked about Narrative Science’s next chapter and how to keep workers in the Midwest — and I finally learned his personal backstory. 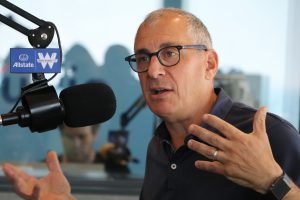 Scott: We’ve had you on the show several times and I’ve never actually asked you questions about your personal life. What did your parents do? Where did you grow up? What was life like for little Stuart?

Stuart: I grew up in Cincinnati; my mom was a teacher, my dad was an accountant. The one common thing that I take from both of them is that they worked incredibly hard. I worked all through high school, and even before high school; that was an expectation in my house. My first job was working for a guy who had a clothing stand in the flea market. He had boxes of ties. People would walk in, they’d mess up all the ties, and I would straighten the ties. That was the entire job.

In the 10th grade I delivered orders for a local pharmacy, and I wound up staying there for three years. I was able to work up through the organization, so I became a supervisor of some other people who delivered.

Scott: What did you see and experience as a young employee that you now covet when you hire people?

Stuart: I always worked for smaller companies, local companies. At the drugstore — and I also worked at a restaurant — the people who owned it were there all the time. They were super hands-on with their employees and with their customers.

I think the message is that you’ve gotta be close to the details, no matter how high up you are in an organization. The downside that I learned from that was that it’s really annoying when somebody doesn’t trust you, or they’re constantly asking you questions. So I think I learned pretty early that you’ve got to find that right balance between being extremely involved, but also hiring people and enabling people.

The narrative of Narrative Science

Scott: You’ve raised $40 million, not an insignificant amount of money. What is Narrative Science’s mission, and how does this capital put you in a better position to be there?

Stuart: I think the good news is that we pretty much talk about the company in a similar way to when we started nine years ago. We do data storytelling. We’ve developed a series of technologies that all essentially do the same thing, but for different audiences. They analyze data and render that output into plain English stories. 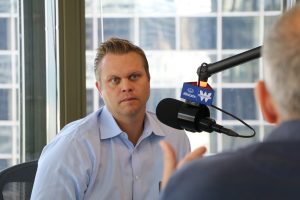 Most people in an organization don’t want to or don’t have the skills to sift through data and look at spreadsheets, and look at business intelligence tools. They just need information to make a decision and do their job better. When you think about business intelligence (BI) and data, particularly in large enterprises, it’s amazing there hasn’t been more progress on the ‘last mile’ piece — how the information actually gets to a decision-maker.

You look at the way we get information from consumer apps like Netflix, or Amazon, or Apple News, and it’s a really great experience. The more you use these products, the better they get, and the higher your satisfaction is — and the less work you have to do.

In enterprise, it’s very different. If Netflix were an enterprise application, you’d get a big dump of data with every movie that was ever made. Each movie would have a whole bunch of attributes. You’d dump that into something like Tableau. You’d get some beautiful graphs and charts. You’d drill down on the comedy bar on a bar chart, and you’d keep drilling, and I guess eventually you would find a movie that you were interested in watching. But what a terrible experience — and yet, in enterprise, we’re okay with that.

It’s really about rethinking how information is consumed in an enterprise, and how much data people need versus the information they need. People don’t want the data. We have tried to convince them that they like data and that they like that experience. But the reality is that most people don’t like data. Just give me the story: give me what an analyst would give me if she had 30 minutes to look at a bunch of data and give me only the information I need. Stories are a great way to do that. Stories are really memorable, and they can often be really personal, and so they’re very valuable tools for communicating information.

We’ve got integrations with every major BI company out there. And we’re super excited about a new product that we’re launching called Lexio, that is essentially an analytics product for everybody in the organization who isn’t a business analyst or isn’t a data scientist, and who just needs the information. It is an interactive data storytelling product with integrations to third-party data sources, like Salesforce. You can collaborate via Google docs. You can send stuff to people, you can schedule the delivery of reports, and other things like that. We’re pretty excited about it. We’re really encouraged with what we’ve seen in our beta, and we think it represents a pretty significant piece of our future.

Scott: It’s the story of the tortoise and the hare. For nine years, you guys have had this premise that no matter how much money and time you run behind big data and all these big buzzwords, even the smartest people don’t want to look at a bunch of dots that aren’t even connected. And you guys just slowly kept building this product. 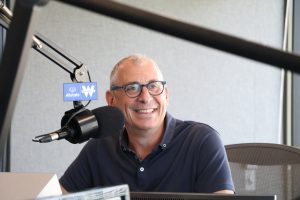 Stuart: I think if you want to do something new, if you want to do something different where a market does not exist, you have to be pretty convicted, and you have to be willing to put the time in. I have told our team repeatedly that our number one strategic imperative is just to be around when the market actually opens up and starts to explode for what we do. And we’re really starting to feel that we’re not out painting a vision of the future anymore. We’re actually out painting a view of the present. And the problems that we’re solving are real and acknowledged, particularly by senior people in an organization. I’m pretty bullish on what the next few years look like for us.

Scott: Where and how is Chicago going to continue to source and develop talent in the tech space? We’ve got the Googles and the Facebooks and these companies that are coming here. From a tech standpoint, everything looks perfect, but how are we going to make sure that Chicago still has a competitive advantage and that we can develop talent? What are you looking at as a Chicago CEO right now?

Stuart: In an interesting way, I think the fact that the larger companies are coming here actually creates more stickiness for people who are Midwesterners, or people who came from outside of the Midwest and went to school here. The reason that they haven’t stayed in the past was because there weren’t enough opportunities to fill up a career. So when we try to recruit people from outside of Chicago, for example, it’s never about the job at Narrative Science, it’s about what happens next. I think that the presence of those companies, while on the one hand it creates competition, it also creates this regional effect that winds up actually working, in the long run, in our favor.

We actually have a pretty robust internship program. We’ve got about 100 employees and we’ve got 12 interns this year. There are other industries that have cracked this code: you look at engineering, where you spend four years in school and in the middle somewhere you spend a year working in a company that’s already been perfected. I think clearly we could borrow some things from other industries and give people that real-world opportunity.