This Company Has Your Next Favorite Superfood

This Company Has Your Next Favorite Superfood

The way to the heart may indeed be through the stomach (metaphorically speaking), but a food entrepreneur’s path to success is less easily discernible.

As previous guests like the JiMMYBAR! Guys have shown, trying to convince retailers and consumers to make shelf space for a new food product is a hard sell.

Emily Griffith has an even tougher struggle. Her company, Lil Bucks, offers fruit seed products that might not be known to many consumers.

Specifically, Lil Bucks are selling sprouted buckwheat (yes, it comes from fruit!). You can sprinkle it on oatmeal for a crunchy texture, use it as a low-sugar alternative to granola, or add it to your next acai bowl.

They also have an on-the-go snack, Clusterbucks, that promises to satisfy your afternoon craving but without the insulin crash. Plus, it has 10 times more antioxidants than quinoa.

Emily has made it her mission to prove that tastiness can mix with nutritional value. Originally from the Chicago suburb of Glen Ellyn, she moved to South Bend, Ind., for high school, so she’s a true Midwesterner. That said, it was in Australia that she discovered buckwheat for the first time, and realized that she wanted to bring it back to the U.S.

Emily came to her interview prepared with samples, plus insight into exactly what makes sprouted buckwheat the next superfood, and how Lil Bucks is going to make it big.

Seeds of an idea

Scott: You brought gifts: a bunch of delicious-looking things. This looks amazing, but I don’t know what buckwheat cereal is. Do tell!

Emily: Lil Bucks is a sprouted buckwheat cereal in different flavors. They’re these crunchy seeds most commonly used as granola. So for anything you would put granola on to add a crunch, like yogurt, smoothies, even salads, toast, oatmeal, even on top of Cheerios. Very versatile. But the thing that makes these so amazing is that they meet at the intersection of taste, texture, and nutrition. I like to lead with taste because they do actually taste good. 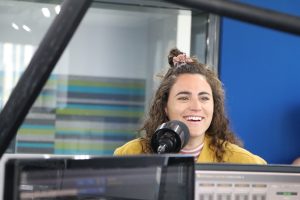 My original product is sprouted and dehydrated buckwheat seeds. They have a really nice crunch: they’re not too hard but they stay crunchy. If you do an overnight porridge or put it in a smoothie, they retain their crunch, which is great. They have a very slightly nutty taste, but they’re not a nut. You kind of get the sensation like you are eating a grain. Buckwheat is sometimes referred to as an ancient grain, or a pseudo-cereal, so a lot of paleo people who don’t eat grains or gluten-free dieters, really like buckwheat. It’s a very misleading name because it’s actually not a grain, it’s not a wheat: buckwheat technically comes from a flour, and these are technically fruit seeds, more closely related to rhubarb and strawberries than to actual grains.

Emily: So the first time I had them was on a smoothie and I got like this really amazing texture experience. I’m a texture person.

Scott: Me too. I am very texture sensitive. Certain types of food where the texture is perfect, I will get them every single time.

Emily. That’s exactly how I am, I can relate to that 100 percent.

So I was living in Australia, and this smoothie cafe was offering buckwheat on their smoothie bowls, instead of granola. They said it’s grain-free and it’s high in protein. I’m like, sure, whatever, I’ll try it. And I obviously loved the crunch and went back to the smoothie shop and was like, you need to tell me more about these seeds because they’re that good. 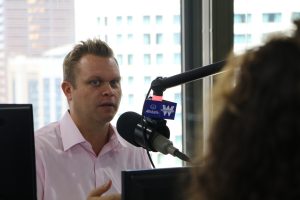 And then I learned more about it — they’re actually really low in sugar, so they’re a great way to add that crunch, and you get that grain sensation but you’re not even eating a grain. I actually just recently found out that I should be gluten free, so it makes sense, looking back, why I felt so amazing after eating them. And then they’re low sugar: a lot of times if you’re eating a yogurt, or fruit, or smoothies, there’s enough sugar going around. So that’s always bothered me, and what I’ve been really crazy about with our recipe development is keeping the sugar as low as possible while still having a good taste.

Scott: What made you want ‘clean’ foods? Chicago eaters are not usually concerned with that!

Emily: Yeah, it’s not L.A., that’s for sure! But I’ve always grown up as an athlete. My mom tried to feed us healthy foods, but she wasn’t feeding us wheatgrass every morning and weird things. But I’ve always been really interested in finding the healthy swaps, so making pancakes with coconut flour instead of regular flour, looking for grain-free options, trying to eat higher protein/lower carb types of diets. And I think that’s always been a healthy journey.

I was actually just looking at all the data because we’re pitching to a big natural retailer. All of our data — of the people who are buying it online, Amazon, engaging on our social media — is 25 to 34. Very skewed towards women. Interested in the same things. Living in the urban, trendy cities: New York, L.A., Chicago, even the suburbs of Chicago. I actually grew up in Glen Ellyn. I went to high school in South Bend, Indiana, so now I’m an Indiana girl.

Scott: I find a lot of people come up with a business just because they could start it. But this is something for you where you were like, I love this.

Emily: Oh, I became possessed. There was really no other option in my mind. Once I discovered it and was eating it every day in Australia, it became that no-brainer — that crunch that I needed every day. And then when I was moving back, I did a search on American Google — because I was in Australia, you have to go through a proxy. I was on the beach, searching on American Google, and I was like, wait a minute, 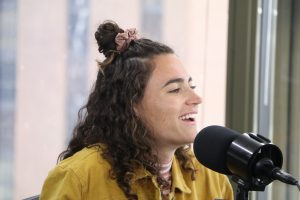 there is no sprouted buckwheat in America.

Eyes on the goal

There’s no other product like this in the U.S., so if you like crunch and you are looking for functional food, this is your answer. It’s extremely versatile. One thing I’m really cognizant of as we scale, now we’re at that point, is that I’ve had some very loyal fans with the brown bag packaging, but now that we’re really trying to expand into those bigger retailers, it’s being very cognizant of not out-distributing our awareness. It’s my biggest fear. But you have to grow those at the same time.

This is a really exciting product. It’s very good, and buckwheat’s very good for soil, so there’s a sustainability aspect to it.

This is the opportunity. We need to take advantage of it right now. I want to grow this now before someone else tries to enter. We want to be in different parts of the grocery store, so starting with the cereal line. We have Clusterbucks, we want that to be a snack, having a single serving of that. Even looking at overnight porridges made from sprouted buckwheat. We have a lot of ideas, savory things. So being all over the grocery store, serving these really functional, crunchy, sustainable foods that are meeting the needs of customers.

When we are getting to big retailers, we really need that to go right in order to have the data to continue growing and get other big retailers on board. With that comes a lot of marketing and demos, which are expensive but very important because you would have been like, what are Lil Bucks? But then you had a taste of Clusterbucks and now you’re like, okay, I’ll eat them.

Scott: What sport did you play?

Scott: I love the answer: in the middle you went straight competitor in your face and locked on. I used to know a lot of people in soccer, and they just completely lock in.

Emily: It’s funny because my personality is pretty laid back, but then when it comes to winning and having something I’m obviously very passionate about succeeding, I can get a little crazy, a little competitive: I’ve got to win!