Be honest, does the mention of “business talk” conjure an image of a 1950s CEO? He’s dressed in a suit and tie, never cracking jokes — always serious and polished.

This probably comes as no surprise, but around here, we believe that business talk doesn’t always have to be serious.

It’s possible to be scaling huge companies, laser-focused on your mission while bringing in your personality, too.

A serious business owner who agrees with this sentiment: John Ostler, co-founder of Eight Bit Studios. The Chicago-based creative shop designs and develops apps and websites for companies that want to push the envelope on originality.

John also co-hosts his own Chicago-centric business podcast, Bytes Over Bagels. After a hiatus, the show is back for a second season and features interviews with an array of tech and business leaders covering topics like design, investment, as well as product and strategy.

As you might expect, the conversation with John went deep on podcasting. He also revealed how his most memorable career moment stemmed from tough times, and why marketers need to be open to having fun.

Developing chemistry with podcasts guests as a ‘hard skill’

Scott: We have a built-in unfair advantage that I think you have as well which is the natural ability to talk, to think on your feet and come up with interesting things to say. Some people are naturally much better at it. 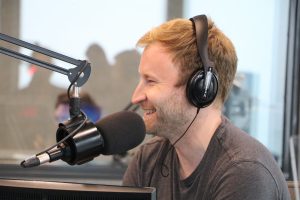 John: Yeah, absolutely. And for us, we found that in the podcasting arena, it’s nice to have the person that has the well-known journey on there, from the company that everyone knows; but what we found is that on the episodes that did the best, very salient points were made, maybe three or four points, and people actually pull from that.

I think what’s interesting about radio and podcasts and things like that is that people only remember so many things about their lives or their days, so the idea that there might be some nugget in some audio just while they’re doing something else is huge. I think that’s basically what everyone was looking for, these things that really pique their interest or get their juices flowing, and that’s really an underappreciated thing.

People who want to get into the podcasting space, I think you won’t be successful unless you can develop chemistry with people in natural settings. I view it as a hard skill because at the end of the day, the point is to get comfortable enough with that person to be able to have that nugget emerge. If it’s awkward, it’s just a talking point. What are we actually trying to get to the bottom of here? Talking about pieces of failure, or things that you went through, or how you grew up — how that affected some of the decisions you made. That gets down to human interest, but I think that’s ultimately what everyone’s looking for: what are those peak moments in your day, and how you categorize your life, that end up defining you or defining who you think you are.

What Chicago tech can learn from Brené Brown’s playbook

Scott: What is the most important memory or moment in your career so far?

John: I’m going to bring it back to Steve Jobs. What’s been circulated a lot is this Stanford speech he gave. One of the things he said was basically you’ll see that once you look back upon your life, all the dots kind of connect. For Eight Bit, we had that moment this summer, where we had a really tough beginning of the year and had to do some restructuring at the company. And one of the questions that someone on the team asked during a company meeting was, ‘What are you going to tell us today to keep us from leaving this place?’ 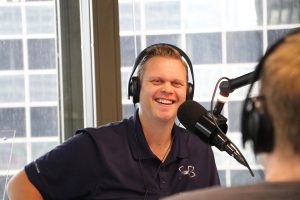 I’ve got two great co-founders, Don Bora, Steve Polacek, and then two managing partners, Heather Brown and Brett Mackie, so there’s five of us there to jump in. And we’re all looking at each other and I’m just like, crap. I was like, ‘I couldn’t tell you.’ And so we didn’t have a response for that. That’s kind of a moment of authenticity. But effectively what happened — and this is why it was a great turning point as an organization — is that three weeks later, we got everyone together and we realized that everything that we had been building to this point — and we’ve been around for 10 years — all these things ladder up to empathy for us, and being a champion of empathy.

The reason we started Eight Bit was to be better client partners and have a better work-life balance. And the more we dug in, the more we realized that we live in a culture that’s very sympathetic, not really empathetic. I don’t know if you follow Brené Brown: she’s an incredible person, TED Talk speaker, the whole nine. She always talks about how the difference between sympathy and empathy is that sympathy is when someone’s down in a hole and you’re at the top of it like, ‘Hey, you alright down there?’ But she says empathy is about getting a ladder, getting down in that hole, and sitting with them and being like, I don’t know exactly what you’re going through, but let me be here with you for this moment because it’s important.

And so I think what’s happened from a Chicago tech standpoint is that we’ve become a very sympathetic tech culture. Everyone’s like data first. Data scientists, machine learning, that’s sympathy. It’s like, we need to make decisions based on uninformed data points: users are on the home screen for two minutes, let’s get them to two-and-a-half minutes. That’s sympathy versus getting down in the trenches. And I think this is where user-centered design and all the trends start to coalesce. It’s about actually getting down on the floor and understanding what users are really going through. And that to me is an empathy thing, not a sympathy thing. And so for Eight Bit, we’re trying to right that ship internally in terms of how do we champion empathy as a culture, as a team with our clients, but also become champions of empathy for the end-users.

I think that’s where this entire movement is going: there was a Simon Sinek movement that said start with why, and I think there’s a Brené Brown movement which is about courage and empathy and getting to the root cause. All this data and analytics and everything is just a means to get more truth about what users really need. 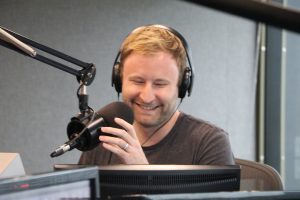 Why fun is the way to play

John: You know Tamagotchi? Where you feed the animal and clean up its poop and it can die. They were huge for a while, I feel like they’ve never really died out. But anyway, we just always thought that was kind of hilarious. Long story short is that the Moxie Awards — which used to be Chicago’s big awards show every year — went away, and we were like, aw man, we love that show. So let’s get a bunch of the people that would generally be part of that show and turn them into 8-bit characters. And you can feed them business cards and coffee. If you give them too much coffee, they have to go to the bathroom, and if you give them too many business cards, they’re out of office. And every time you successfully answer a correct business proposal, which is the thing that happens randomly, you fundraise for that character. So we had this competition on there for about a month.

We’ve always try to do things that break the script — that are unique and new — and I think that that game is a great example. There’s a lot of ways you can spin up a fun competition among the Chicago tech elite, or whatever you want to call that, but I think doing it in a way that’s very memorable or new — I would say that more companies could exploit that better. Do something that people will actually remember or value or have fun with. Not everything needs to be this serious conversation about fundraising.