Would You Pay to Be Very Cold for Three Minutes? CryoBar Thinks So for Hyper-Efficient Therapy

Would You Pay to Be Very Cold for Three Minutes? CryoBar Thinks So for Hyper-Efficient Therapy

If you’ve lived through a Chicago winter, the idea of paying someone to let you stand in a machine that gets cold enough to give you frostbite seems dubious at best.

But CryoBar owner Sara Latham is convinced that that’s exactly what many of us dealing with injuries, stress and even chronic illnesses need to feel better.

For the uninitiated, CryoBar offers treatments based around the belief that submerging oneself partially or totally in subzero temperatures for very short periods of time can treat a range of ailments. Their most popular treatment is for your whole body, and involves two to three minutes in the Cryosauna, a machine that looks like it came straight from a sci-fi movie. It uses nitrogen vapor to drastically lower your skin temperature, which, according to CryoBar, encourages blood to rush from your extremities to your core. They say that when you emerge from the Cryosauna, the blood that travels back to your limbs will be rich with endorphins (the same hormones that cause runner’s high), collagen, and oxygen.

This is supposed to help with conditions including arthritis and sports injuries, as well as cosmetic things like decreasing the appearance of wrinkles. Sara herself first tried cryotherapy to help with her arthritis and the pain she went through after having both hips resurfaced, and she said that after her thyroid failed and she gained weight, the treatment helped her lose 16 pounds.

She came by the WGN Studios to explain why freezing is the next hot wellness treatment. 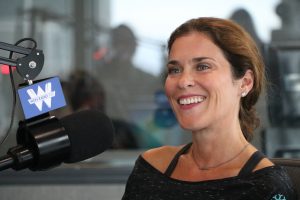 Sara: We started in February of 2016, and it’s all about recovery. It’s all about reducing stress, inflammation. Cryotherapy is a great tool, it’s a natural endorphin high. The whole body, which is our most common treatment, is only three minutes.

So you come in, you get changed, you get in the machine. You don’t have to wear a mask. There are some cryotherapy chambers, as they call them, where your whole body is in it — your head, everything — and you do wear a mask, and then the socks and the gloves to protect your extremities. But we have the CryoSauna — it’s a Juka machine, is what it’s called. You’re in there for three minutes, instead of going for an hour-long massage to help relax your muscles, increase your endorphins, which I myself don’t have time for. I didn’t before the CryoBar started, and now I definitely don’t.

It’s a stress-free environment: we really focus on that, focus on the clients. What’s the easiest way — let’s streamline it so they can come in and they just have to give us their name if they’re returning clients. It often takes our clients longer to get undressed and redressed than it does to actually be in the chamber for three minutes.

The nice thing too is that anything after a minute and a half is considered a treatment, putting your body in a natural fight-or-flight response. Part of that is the endorphins, which we all need and we all produce, but at different levels. And when you’re really stressed or tired you need that extra boost. Say it’s two or three o’clock in the afternoon when you’re like, okay, do I need a coffee? Do I need to get up and walk around?  Hey, I can run to the CryoBar. I can get undressed, get in the machine, three minutes, get out, get redressed, and be back at work. And we have a lot of people that do that, so it’s a great way to beat that midday slump.

What’s going on in there?

Scott: What exactly goes on physically in the experience?

Sara: Once you get in the chamber, you hand the robe over, you’re standing in nitrogen vapor. We get calls all the time where people are like, will I have a towel for when I get out? I’m like, no, you’re not standing in liquid nitrogen! People ask me, what’s it like? Imagine standing in a cloud, that’s what I think of because it’s fluffy. It’s dry. 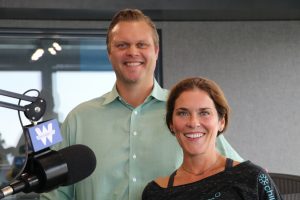 So you’re standing there, someone is talking to you the entire time. It’s nice to have that distraction: it’s cold, I’m not going to lie. People ask me, so you just love being in the machine? I don’t like being cold — I’m cold all the time. Do I love being in the machine? Not necessarily. Do I love the way I feel after? Absolutely, 100 percent. I don’t have to take my arthritis medication anymore. I sleep better. I have that natural endorphin high.

Your body goes into a natural fight-or-flight response. You’re not ingesting anything, we’re not injecting you with anything. You’re just standing in a cold cloud in your underwear. It’s oxygenating the blood that has just been pulled from your extremities and been sent to your core. Pulling that blood from the extremities is why we give you the gloves, the socks and the slippers. When your body is concerned about its welfare, it doesn’t care about your digits because you don’t need your digits to live, but it does care about your brain and your heart and your lungs and your kidneys and your liver, all that good stuff. So it’s pulling there.

Your body is also producing collagen because it thinks you’re standing naked on top of Mount Everest. So it produces a type of collagen. We all think of collagen for wrinkles and skin, but collagen is the number one protein the body produces to heal muscles, ligaments, and tendons, not just the skin. So it’s a part of that recovery process. We have a ton of athletes that come in because two to three minutes in our whole body machine is the equivalent of 20 to 30 minutes in an ice bath, and there’s no downtime: your body immediately starts warming up so you can get back in action.

We have clients that come for weight loss. I have a hypothyroid: two and a half years before I was introduced to cryo, my thyroid crashed and I 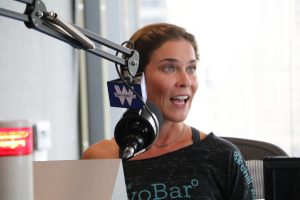 gained 16 pounds in four months. I’m five one, it was like gaining a hundred pounds. All the doctors and nutritionists and medications and everything, they finally got it to stop going up, but they couldn’t get it to go down. Three months into doing cryo, I had lost almost seven pounds. My hair was coming back. My body really reacted in such a positive way to the cryo. I’ve had both my hips resurfaced, and so sometimes it’s hard to move. I was taking anti-inflammatories every day just to help me move —  and that was in my mid-thirties. I don’t have to take that anymore. I don’t have the same aches and pains now. Does it still get bad? Absolutely. You have to stay consistent with it and figure out what works best for your body.

The thrill of the thaw

Scott: Can you describe how I’ll feel afterwards?

Sara: When you step out of the Cryosauna — and this is my thing, which is why I love it and I’m a little addicted to it — you get this natural, completely legal, endorphin high. Your blood is released back to your extremities, the endorphins are released, the collagen, all that good stuff that your body has been naturally producing on its own.

You step out and you’re ready to accomplish whatever, to get through your list of things to do. You’re cold, obviously, when you get out, because it’s cold inside, but your body immediately starts warming up. It’s like if you sat down in a chair and you crossed your legs and your foot fell asleep, and then you straighten your foot and you feel that tingling sensation. It’s this kind of funky tingling, and we’ll get people sit there like, ooooh. We call it the CryoBar look. You’re standing there in your robe, you’ve got your big white socks on, you’ve got your big funny house slippers on, you’ve just taken off your wool gloves. But you’re confident, you’re comfortable, even though you’re standing in a robe in the middle of Lincoln Park, Bucktown, or West Loop.