If there’s one industry that’s both very old and highly innovative, it’s food. We’ve been eating since before we could talk in more than grunts — but what we want to eat, and how and where we acquire food, continues to change rapidly.

One company trying to balance that long history with the need to innovate is wholesale food distributors Gordon Food Service. The company traces its roots back to 1897 when it delivered butter and eggs. Now it employs 19,000 people, and in 2018 Gordon Food Service was the 22nd largest privately held company in the US, according to Forbes.

As the market has changed, the company — which is mainly a supplier to restaurant operators — has grown and adapted.

One of the people leading the effort is Managing Director Mandy Tahvonen, who previously worked as a program leader for consultancy Doblin.

As Mandy explains, Relish Works is currently working on multiple industry-improving projects; but one that she and Gordon Food Service are especially excited about is The Food Foundry, an accelerator program they’re running with Chicago-based digital startup incubator 1871.

Each four-month program provides five to seven startups with mentoring, networking opportunities and a structured curriculum, all tailored to fit each startup’s plans, as well as an investment of $75,000. The next cohort starts in mid-January 2020, and the application deadline is October 16.

Learn more about that from our interview with Mandy and why Relish Works is more than just the extra topping.

Scott: Can you explain what Gordon Food Service is? 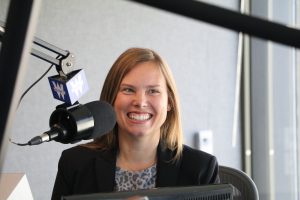 The distribution business is being squeezed, and wholesale food distribution, in particular, is being squeezed in new ways. Traditionally it’s been US Foods and Sysco as our competitors, and now we have Amazon creating micro-fulfillment centers with their Whole Foods. But also, we’re really thinking about how to take our shelf-stable grocery items and offer those to the world in new ways. Traditionally we’ve been delivering those products on big trucks: that’s not how the world works anymore, in urban environments like Chicago. And so the Gordon family and the Gordon board — and when I say Gordon family, I mean like 20,000 people — they want this business to live on. It’s 125 years old: they want it to continue for another 125 years.

Scott: How long ago did they start this conversation about Relish Works, and what it was going to be?

Mandy: About three years ago they started it, and I’m coming up on my two year anniversary. I was working at Doblin, which is an innovation consultancy. I was working with Rich [Wolowski], the Gordon Food Service CEO, on what this innovation hub could be. I had come back from maternity leave and he said, hey, you want to join us? And I said, yup, I’m in. Because I had set up some of these corporate innovation hubs for other companies, I knew that we would have more commitment and the ability to think about this for the long haul. And I think that’s what’s special about what they’re trying to do.

He has a very engaged board. These people care deeply about this family business. He’s done a really good job of having the wherewithal to know, OK, I have a vision: we need to be doing something different. I might not exactly know what, but I’m willing to engage a lot of people in the conversation about it, and bring people around the table. 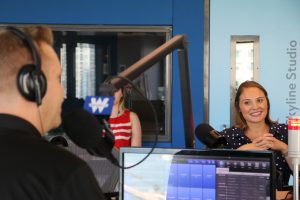 Scott: Even if that fails, at least you know all the different ways not to do this.

Mandy: Right, that’s part of the reason we’re set up as a separate entity. We have a totally separate operating structure, and are a separate legal entity, because we can take risks and we can fail a little more safely.

I think that one major thing is that I didn’t grow up in this space. I’m not an expert in distribution. I find oftentimes when I’m talking with other corporate innovation hubs, the person has moved throughout that corporate environment. And it’s no offense to that, and that’s a great career trajectory: but for me it’s like, can I come in and do this thing with you, an interesting company, an engaged board, an engaged CEO, an awesome team. Build it, let’s do it. And my goal isn’t necessarily to figure out the inner workings.

I’m slowly learning how to be a politician. Somebody recently was asking me, what was your plan? And I was like, I was just trying to be helpful.

Scott: The one thing that is enjoyable about consulting is that when the project ends, I don’t know you anymore.

Mandy: And you can be a little bit more edgy, in some ways, because you’re like, well, I’ll see you again or I won’t. Now I’m in this company, I’m learning slowly but surely. I do need to focus on some relationships — I’m getting better at it.

What’s on the menu

Scott: I’d love for you to talk more about that specific process that you’re honing at Relish Works, and how that plugs into Gordon.

Mandy: At Relish, we do three things primarily. The first one is conceptual design or business design: we are looking for new P&Ls, not new tools — really thinking at that level. 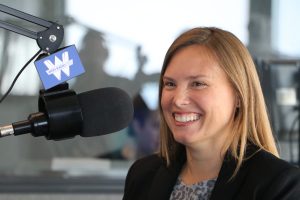 The second thing we do is invest, and we have two mechanisms for investing. We have our Food Foundry accelerator program, where we invite startups into a more structured program, and then we have a very small venture fund.

The last thing is that there’s a recognition that legacy companies have traditionally done everything themselves, and that we won’t be able to be successful doing that in the future, so we need to think about new partnerships and new ways. I like to say fewer marriages, more dates. So we’re thinking about partnerships, and we do that with the VC community, with startups, with industry experts, with restaurant operators: really trying to focus on those relationships.

Scott: What do people have to gain from taking part in Food Foundry?

Mandy: This is in partnership with 1871, so you have access to all of the network and connections and programming at 1871. And then we structure one week of programming a month on site, over the four months, and it’s access to Gordon Food Service. So if you’re a small startup and you want to understand enterprise-level challenges, it’s a great opportunity. And we also make a small investment.

Scott: What are some of the cool projects you guys are working on?

Mandy: There are three things that I’m really excited about that we’ve launched as separate entities. One is something called Poolside, and it’s like Match.com for the restaurant industry.

Finding labor for restaurant operators is extremely hard. What we realize is restaurant employees string together multiple part-time jobs: yet when a restaurant operator places a job opening, they say applicants need to be available all the time. Well, that doesn’t work for people who are already working multiple part-time jobs. So we’re really focusing on this micro availability and geography, because you might be taking public transportation, so how do we make it easier for you to get between your multiple jobs if you’re switching jobs every hour.

A second one is, we found out that restaurant operators come to their broadline distributor — which we are — for the majority of their products, but what they struggle with and actually what they enjoy looking for are the specialty items — and specialty means many different things to them. So we started an ecommerce site called Orderve  and it’s to dropship specialty items. Right now, we’re just serving Denver and Chicago.

And then the last one we’re rebranding, but it was called Here, Here, and it made searching for and paying for group dining experiences easier. While it’s set up separately, it’s still in the exploration phase; but we’re really thinking about that restaurant operator, and how could we help them run their business easier — it’s a difficult business to be in.