Melissa Hartwig Urban, co-founder and CEO of Whole30, was the first guinea pig for her diet.

“I was eating pretty healthy whole foods, I was exercising a ton: but what the Whole30 showed me in that first self-experiment were all the ways that I was using food to comfort, reward and punish myself, and to self-soothe to relieve anxiety,” she said of the origins of her diet plan, which has become a movement.

Melissa spoke to Technori on the sidelines of the recent G2 Reach conference, which was held September 11 in Chicago.

For the uninitiated, the idea of Whole30 is to break the pattern of unhealthy diet habits by taking on a highly restrictive diet for 30 days: that includes cutting out dairy, sugar and grains, among other ingredients. 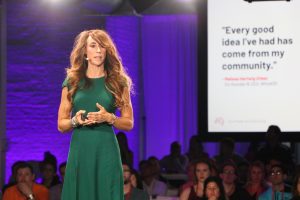 Changing her food consumption sparked other changes for Melissa.

“It taught me different ways to cope and sit in my feelings instead of just numbing them with food. For the first time in my life I was able to get off the scale and out of the mirror, and really developed a healthy relationship with food.”

Whole30 has been around for a decade now and has had significant penetration. A few years ago, “The Whole30” book hit shelves and went on to sell over a million copies and top the New York Times bestsellers’ list. A 2018 survey by the International Food Information Council Foundation found that 5 percent of Americans were following the Whole30 diet.

One reason for the diet’s success is the strong online community Melissa has created, which includes forums, an advice column, meal plans, and coaching services. Seeing customers as a real community has been key to building the Whole30 brand. It’s a point Melissa emphasized at G2 Reach.

“I really want to leave them with the idea of building your brand with your community,” she said.

“Often we think about delivering a product to the customers and then customers giving feedback, but I’ve built the bus with the people riding … Having a really clear vision, communicating that vision … ‘this is what we do, this is what we’re good at and we’re going to stay here until we get really, really good at it’ — that allows you to build that customer loyalty,” she explained.

As for her advice for people who are doing Whole30: “keep it simple … I get people who are like, I’m on my first Whole30 but I think I’m eating too much fruit … I’m like, look, was it Whole30? Did you put it in your mouth? You’re doing fine. So keep it simple.”