You’ve decided to run a race. Maybe it’s a 10K or maybe you’re one of those nuts who has signed up for the Chicago Marathon. Either way, congratulations! Now, how are you going to train and stay motivated?

Tech helps us in so many areas of our lives — from watching movies to ordering takeout to answering emails — and it can help make you a better runner, too.

Matthew Knippen, CEO and co-founder of Charge Running, knows that you have choices when it comes to running apps for improving your running. Charge Running sets itself apart by connecting you with a coach and other runners while you’re pounding the pavement (or the treadmill).

With monthly plans around $15 or an annual plan for just under $120, you get access to multiple online running sessions every day, at different times, with different levels of intensity and duration. The app uses leaderboards to motivate you to run faster, and it also measures data like pace and steps per minute, so your trainer can give you performance-enhancing tips in the moment.

Matthew visited the WGN Studios to explain how the app got off the starting blocks, and where he’s hoping the journey will take him.

Scott: Where is your favorite place to run in Chicago? 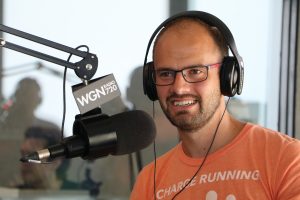 Matthew: Obviously along the Lake is one of those that’s always beautiful. I’m in the suburbs, so I don’t get to run in Chicago as much as I’d like, in the south suburbs of New Lenox, Manhattan, Illinois.

Scott: I’m not a good runner. I think I just make excuses for it, but I admire those that do. I really want to do it but I can’t figure out how to get myself to do it.

Matthew: I’m the perfect guy to be on here then, because that’s truly what we built our app for. There are a million other running apps on the app store and they all pretty much do the same thing: you press a button, it tracks how far you go, and you get to share it to Facebook.

I have a co-founder [Rory Justin] and we both enjoyed running together in high school, because we’d get a little competition going between us. He had to move across the country, and all of a sudden we both stopped running — it just killed it for us. So we came back, we addressed that idea, and we said, well, what would it be like if we could run with each other but from across the country? And that’s where this basic idea came from.

When you picture your normal running app, just showing stats, we do something very different. When you open up the app, you see, hey, there are 20 different live runs happening today, with one starting in less than 10 minutes. I’m gonna run with that, and there are eight other people signed up at that exact same time.

When I click into the run, I’m not just seeing my stats on my phone anymore: I’m seeing a live leaderboard with everyone doing the exact same thing that I am. And that’s not even the best part. Each run also has a live trainer there to coach you — and more importantly motivate you —  to complete that run. They’re getting hold of all of your stats in real time, so they’re saying, hey Scott, you’re doing great, but I want you to know that Matt is just ahead of you. Can you pass him? You can hear this live in your headphones.

Matthew: I personally like running outside, but I also live in Chicago, so I get to test both seasonally! When you’re running outside, we use the GPS location so we can track your distance. These phones have so many different sensors, and if you apply them all to running, it can do some amazing things. We can see your cadence — how many steps you’re taking per minute — and we can actually coach you and say, hey Scott, I’m catching you right now at an eight minute pace and you’re running 140 steps per minute. That’s actually a little bit too slow on your step size. If you decrease your step size, you can run more efficiently, with less effort, and run the same speed.

We have a lot of people who join to walk. We have a live chat room, and people who are walking are typing funny comments or adding commentary, so it becomes a really motivational way to walk with a group. We have a run club where people are saying, hey, I’m doing the 4 PM run, who’s doing it with me? And it reminds you when you’re checking your social media: yeah, I could be on Facebook for the next half hour, or I can join this quick run with Larry. 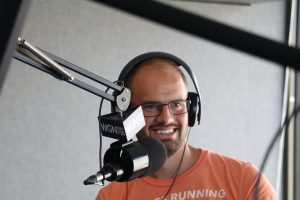 Why this app beats a coach

Scott: I see the real market opportunity in the virtual coach area. I can see those in particular who liked running, maybe ran back in the day, and are trying to do a 5K, 10K or a marathon using this as an analytics tool, plus a guidance tool, plus the fact that you’re doing it with a group of people who are also training for a 10K.

Matthew: Absolutely. A personal coach to just go do one run, it’s $50 to $100 for one lesson. And some of these classes on the app, especially if you pick nonstandard times, you can sometimes be in a class with only one or two other people, where you’re getting a near-private lesson. And you could do them three, four days a week, and they get more stats than if they were running next to you. There’s no way a coach running next to you is going to know exactly how many steps per minute you’re doing if you guys are running outside. We get all of these great stats, and we get to talk to you while you’re running, and there is no other app that really does that.

Scott: Tell me about the math on this: what is the business model?

Matthew: Yeah, so our business model is simple: we charge $10 a month, if you buy a year at a time, for unlimited access to runs; and $15 if you’re going to go month-to-month. That gives you unlimited access to not only the 20 live runs we do a day, but we also have on-demand content so you can run it at any time. If you want to do a 5K training program, we’ve got that. If you want a 10K training program, we have that, as well as a plethora of other types of runs.

On track to keep growing

Matthew: It can go in a hundred different directions. We’re fortunate to be ahead of the curve: having this live experience puts us way ahead of most other apps. That being said, there are a lot of different things that we can do to make it even more engaging or interactive. I’m a big VR fan, I have the Oculus at home, I love what it can do. I don’t think that technology is there and ready for us quite yet, but it’s moving fast.

I think that there are a lot of different directions that we can go, even staying on the mobile app and getting more connected smart devices to get us more stats and provide more motivation. What we found out is if someone joins our app and they do three to four runs with us, they’re a subscriber nearly for life. And that’s such a cool thing because we know that they fall in love and just keep doing it. We had one person in our very early interviews who said, now that I know that I can run with this, I never want to run without it.