At its core, marketing is one person saying to another (or many others), ‘hey, check this out.’ And it’s that small but powerful sentiment that’s at the heart of PromoShare.

The company teams up with clients looking to put on a live event. Their users find events they’re interested in and sell tickets to their friends using the PromoShare platform, which tracks how many people they’re bringing in and gives them rewards for hitting certain goals.

The ambassadors, as PromoShare calls them, don’t need 700,000+ followers to be eligible for partnerships. As founder and CEO Ernesto Pedroza explains, they can be micro influencers with 1,000 to 100,000 followers, or nano influencers, with even fewer.

As long as they’re convincing people in their network to buy tickets, PromoShare wants to work with them.

As they take on more and bigger clients — as well as maintaining strong relationships with repeat customers — Ernie’s growing not just the company’s portfolio but their ambitions.

He came to the WGN Studios to talk about his former life as a high school DJ, PromoShare’s technique, and how life lessons from his dad help him keep his eyes on the prize. 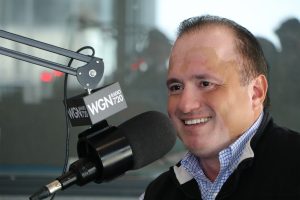 Scott: Walk me through what happens when I want to use PromoShare.

Ernie: We’ll talk about some of the family events because those have been the most successful. What PromoShare does is provide people that we bring onto our platform with their own little dashboard where they can shoot out content. We have all the promotional content that’s approved by our client for them to distribute, and then they have the ability to generate their own. We capture all the engagement, all the impressions, sentiments, so on and so forth. We also track conversion.

Based on their actions they get points so they can see what’s going on — you sold so many tickets, you’ve generated so much engagement — and their points go up. They can see that in real time, so they’ll see, hey, I need to sell two more tickets, or I need to do this to earn two tickets, or to get this experience, so they’re gonna be motivated by that. The nice thing about it is that our clients get to see all this, down to the individual. And our ambassadors, on their platform we have different leaderboards and boards where they can see what the other ambassadors are saying or doing. People can post something on there to other ambassadors and they can help each other out. The nice thing about it is that people see what other people are doing and they see that it’s real.

I’m very much about, what’s the end result? Coming from the direct mail world — it’s like, okay, how well did it work? Did it sell tickets? A lot of the times, when we’re compared to a handful of companies — and we identify them as our competitors — they don’t have those components. They’ll go to the client and say, this is all the engagement data we got you: you need to tell us whether or not it actually converted. Or maybe they’re not paying attention to that number, they don’t want to know that number: they just know that they generated a ton of traffic for you. 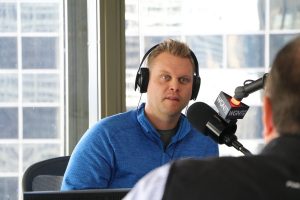 Scott: There is an insane amount of market opportunity because the future of media is so fluid right now. Traditional outlets have yet to figure out what they’re doing, and when they do, a ton of money is going to start flooding down to companies like PromoShare that are on the cutting edge of connecting people and using networks.

Ernie: I’ve been a marketer since high school, being a DJ and throwing parties, and making money on the weekends. When I got into college, I got into graphic design and website development, and that was very new back then. I decided to jump into the direct mail and print world. This was in 2002: I was just out of Loyola and was very young and very aggressive and ballsy.

What we were doing back then with data and direct mail, we were building networks of people and building these loyalty rewards programs for our customers through data, and creating different segments. That’s exactly what we’re doing with PromoShare. We have clients in specific markets, and we created an influencer rewards program for them that drives people to their events. We’re utilizing people that are local. We started building networks for our clients, just like in direct mail, and essentially utilizing these networks to help our clients promote their live events and now their consumer brand goods.

We’re working with some fairly large entertainment brands and sports teams, and working on something with Domino’s Pizza, with PepsiCo. Monster Jam is in town this weekend, they’re a big client; Feld Entertainment has Jurassic Live coming out; there’s Sesame Street Live, and Disney On Ice.

Scott: You are a minority business owner, born and raised in Chicago. I’d love to talk to you about your experience: I think not only is it good for other first and second generation founders to learn from, but I think it’s better for everyone to understand the world we live in and the people we work with.

Ernie: Absolutely. I was born and raised by two immigrant parents and they were not entrepreneurs, they were laborers. Dad came in ‘69 or so and got into the steel mills. Times were different back then, with immigration, so it was an easier path to residency and ultimately citizenship. He left my mom pregnant in Mexico, with my other two siblings. I’m number five of six. He might’ve had a couple of jobs in restaurants, but ended up finding something good in the steel mills. My mom came on a visitor’s visa, as did he. They didn’t come across the border, trudging through the desert and all that other stuff, they flew here. My brother who was born here was ultimately able to secure residency for my parents, and uncles, and cousins, and so on. So that’s how we stayed here, and then I came next, and I have a younger 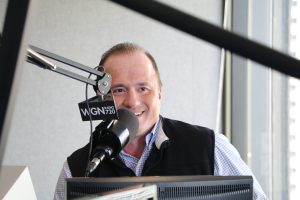 I always had that bug of being an entrepreneur or business owner. We grew up in a little village, and if you’ve ever been down 26th street, I think it’s still second to Michigan Avenue in business revenue. You drive down there at night, it’s almost like a mini Las Vegas Strip, with all the lights. A lot of my friends’ parents were some of these business owners, and I admired it — it’s like, wow, that’s cool that you guys rent videos, you guys sell tacos, or own grocery stores, or whatever the case is. My father was a steel worker and my mom was a seamstress.

One of the things that my father instilled, aside from hard work — he was an extremely hardworking man — was don’t pay attention to minutiae. I grew up playing baseball and would go to play teams that were white. And it was like, ‘oh, they’re racist,’ or this and that. And my father was like, don’t pay attention to that, that ain’t going to get you anywhere. You’re the same as everybody. You go out there, you try your best.

I try to put myself on the same playing field as everybody else. Because this stuff does exist, including on the business side, and I’ve experienced it time in, time out. People have not given us the credit, or me the credit, or have made comments about minority businesses: ‘oh, you’re a minority business, so you don’t qualify for this bigger piece of the pie.’ I won’t mention the company I had that conversation with, but it’s like, are you kidding me? That definitely exists, but it doesn’t keep me from continuing forward. And there are many minority-owned businesses that have made it big, and they say the same thing: we’ve not paid attention to the haters, or we’ve utilized them as fuel to keep powering ourselves through. And that’s the same mentality that I take.