Established companies often wonder what it takes to create true digital transformation — the kind that helps your customers and your bottom line.

Hub Group is a great example.

Founded in 1971 on the outskirts of Chicago, by Joyce and Phillip Yeager. The couple saw the potential of intermodal shipping, in which containers are transported from one place to another using multiple types of transportation — usually trains and trucks — without having to unload their contents.

Hub Group is still thriving today, thanks in large part to Joyce and Phillip’s son David Yeager, the current CEO and Chairman. A few recent highlights: in 2017, they celebrated hitting $4 billion in revenue and were named to Forbes’ 2019 list of America’s Best Mid-Size Employers for the second consecutive year. They company is growing too — with plans to expand its Oak Brook headquarters and almost double the number of staff to 1,500 people.

David made a stop at the WGN Studios to talk about the disaster that forced them to innovate and the careful process of developing new technology. 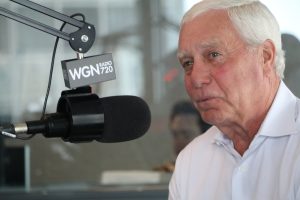 Scott: Let’s start off with what Hub Group is.

David: Hub Group was started by my mother and father in 1971, in a one-room office over a flower shop in Hinsdale. I joined the company immediately after undergrad in ‘75, and by that point they’d already grown the business to about 20 employees and $20 million of revenue. Obviously we’ve gone through a lot of changes. We did take it public in ‘96 — a whopping $50 million market cap at the time —  which of course gives us great access to the public markets.

Scott: When you took it over, talk a bit about what you saw. It’s your family business, you’re fresh out of college. What were you looking at?

David: That’s an interesting question. The reason my dad started Hub Group was because the industry itself had a terrible reputation which they really worked on to maintain. He thought that if you could bring integrity, be fair with clients, give them good customer service, that you could prosper. And sure enough, obviously the results reflect that.

When I first got into the business, it was completely non-asset-based. The railroad supplied the equipment. And the intermodal product at that point was looked upon very negatively by the railroads, because at that point in time, the profitability was so low. It was a business that in the early stages was very, very tough. It had a lot of small entrepreneurs, but nobody of any size at that point. 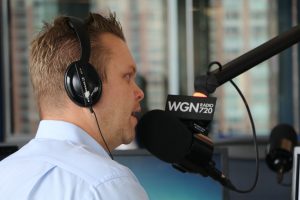 David: Well, basically I was at lunch down in Fort Worth with the CEO of the Burlington Northern, and he told me they were not going to furnish the assets anymore! It was very direct. It was a big transition for us, going from not having to actually control the asset all the time, make sure that you had balance — there’s a lot of things to it. It’s very difficult.

At the time we probably thought that it was not the best thing for us. In hindsight, fortunately we had that conversation, because we would not be in the position we’re at right now. I think it’s driven us forward with technology. We are the first — and I think still the only — fleet with 40,000 containers where all of them are tracked with GPS devices. It took us about six years to work with several technology companies, first of all to create a device that the railroads couldn’t knock off during the journey, and that could have a battery life that would be long enough for the container — and then the implementation and the cost obviously associated with it. It tells us not only where the container is, it tells us if it’s got any freight in it, because it has a sonar device on the interior, as well as if the doors have been opened.

So it forced us to make a lot of technological changes, and as a result of having all that information and visibility, we’ve been able to go yet further and give predictive analytics to our customers about when their shipment will be delivered, what’s on the container. It really was a driver for us.

The tricky road to getting tech right 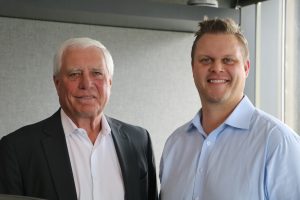 Scott and David on Technori

Scott: What is it like for you guys internally when you decide we’re going to take advantage of new technology that no one else in our markets using?

David: We really look to how it will impact our customers. How positive will it be? Will it create cost savings? From a technology perspective, the way that we focus on it is that the commodity type — an ERP, something such as that —  we buy that off the shelf. But anything that’s really a value-added customizable product we create internally. And that gives us a lot of flexibility as far as using our industrial engineers, using the assets we have and the inferent knowledge we have in the transportation sector to be able to progress it, to give solutions the customers do in fact need, and something that’s usable for them.

We used to try to build virtually everything, and our last build — about eight or nine years ago — completely failed. So we stepped back from that and re-looked at it. It was probably about $10 million, but the problem was that it diverted management attention for so very long. It really wasn’t the money that upset me, it was the lost time — it was about two and a half years — that we didn’t move forward creating customer value with our technology, and the huge amount of management time it took.

I think the major problem was that we didn’t effectively communicate between the business and our IT people. We’re right now going to go into a major implementation of Oracle, their OTM product. We have about 25 business people whose full time job is interacting with IT to make sure that we’re implementing it as the business should run it. These are some of our best people and we’ve diverted their attention. It’s now been a year and a half, but we’re going to come out the end of it with a product that’s useful and functional.

Staying ahead of the curve in the road

Scott: A lot of CEOs fail because they stick to their niche, and you didn’t do that. I would love to know if you were self aware of that — if you were thinking, I’m not going to let business pass by, I’m gonna keep learning?

David: I think the main thing we’ve always tried to focus on is evolving and being open to change, knowing that our processes may be great but they can be improved upon. We always try to keep an open mind. When I first got in the business, we owned nothing — not even the telephone at that point in time, and as the intermodal business began to evolve, we saw that in fact, if you don’t have your own assets, you really can’t be a player. Our traditional competitors have either been minimized or are completely out of business at this point in time, and the asset-based players are really what dominate that space.

Scott: What do you see as the next advancement to the logistics of trucking in the industry in general, or something you see that is moving well in Chicago?

David: In the industry, Chicago is a very special place, with Coyote, with Echo, with Hub, and Uber Freight coming about very shortly as well, so it’s really had a lot of the innovation within the truck brokerage space. We’re seeing the U.S. move towards outsourcing. Europe is outsourcing about 45 percent of logistics management, and we’re at maybe 10 percent. It may be a potential $20 million in revenue for us, so it is significant.