According to the American Hospital Association, 3.6 million people miss appointments with healthcare providers every year because they can’t make it to the clinic or the office.

In some cases, it’s due to a lack of public transportation options or an inability to afford a taxi. Regardless of the reason, Mindi Knebel, Founder and CEO of Kaizen Health, is tackling the issue head-on.

Kaizen’s goal is to improve healthcare access by offering a cost-efficient logistics hub for both providers and patients. Through their white-label platform, providers can create an appropriate transportation plan right when a patient books an appointment or at the time of discharge.

“We’ve treated transportation as the stepchild, but really they’re at the core of [healthcare access],” says Mindi, who previously served as Director of Operations for healthcare incubator MATTER.

Venture capitalists are buying into her version. This past May, Kaizen raised $3.8 million to help them grow.

For Mindi, a self-described startup junkie with an early passion for healthcare, it isn’t her first rodeo in the startup world. But it is the first time she’s at the helm — inspired to create a solution for a problem she witnessed up close. At the WGN Studios, she explained what pushed her to create a better healthcare transportation option, and how working at startups did and didn’t prepare her to start her own.

The brokers’ model is broken 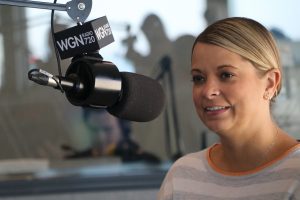 Scott: There are a handful of areas where investors are sitting back waiting for a company like Kaizen that are creating a digital connective point that will alleviate a lot of current hardships.

Mindi: For sure. In the Medicaid space, with your typical broker, you’re having to call two to three days in advance to schedule a ride — and you sit on hold, and you jump through all this red tape. That’s just not the expectation that we have today.

We built out a program with Molina and CareSource in Columbus, Ohio. They have the highest rate of infant mortality, and the city hired Sidewalk Labs — one of Google’s consulting companies — to figure out why.

They determined it was a lack of transportation to prenatal and postnatal appointments, as well as a lack of access to fresh food. Well, these women actually did have access to medical transportation, it was just through this very archaic process: two hour windows on either side of your appointment, and you’re phoning in. The women just weren’t using it because it doesn’t fit into their lives. So we built out our web and mobile platforms so that we could give them the control. Giving it to the women, they can say, here you go, schedule your ride when you need it — and it’s within our business rules so it works.

There’s a lot of overhead in that space: in the broker space they’re making $10 to $14 on top of the cost of each ride. If somebody else is just doing it from an app, think about how much you can lower that.

The other big thing is transportation companies have been treated very poorly in healthcare. When I was doing my research, the transportation companies were like, I have no interest in speaking to you. I have no more Medicaid rides, no more healthcare rides. And I’m like, tell me why. And they’re like a) we don’t get paid well and b) we don’t get respected. And I’m like, OK, let’s address those things.

And so we’ve taken a big turn on the economic model. The brokers have taken capitation: they make the same amount of money every month if they give one ride a day or 1,000 rides a day. In that broker model, if they have a chance to give a ride to the airport for full fare, versus taking a healthcare ride for 50 or 70 cents on the dollar, they’re going to take the full fare ride all day, and then we wonder why healthcare transportation is broken. We’ve treated transportation as the stepchild, but really they’re at the core of this.

We pay them market rates: our administrative costs are so much lower, because everything that the brokers are doing manually — like call centers, checking eligibility, plugging into four or five different programs, faxing over orders to a transportation company — we’re doing all that programmatically, so our overhead is so much lower, so we can pay the transportation partners better. We can lower the overall cost of transportation, and still be more profitable than the brokers. 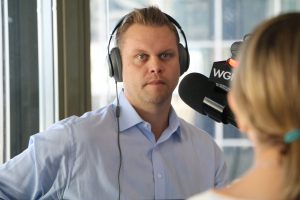 The story behind the mission

Scott: When I leave in the morning, there’s a little bus that all of these old people pile on at like eight in the morning to go to Northwestern Medicine, and they sit there for hours because they all have appointments between 9am to 3pm. That’s insane to me.

Mindi: My mom’s sister had MS [multiple sclerosis] four years ago. She was only 53. She lived at home and she was perfectly able to take care of herself, but she started to lose a little muscle strength and needed physical therapy a couple of times a week.

It shouldn’t have been a big deal, except she never got her driver’s license, and the Medicaid transportation there was so horrible. My family’s all working. She had no reliable way to get back and forth to physical therapy a couple times a week, so she had to move into a nursing home Monday through Friday, and we’d go home on the weekends. Imagine being 53 in an end of life nursing home: she was miserable.

I started looking into other options for her. But then my mother-in-law was diagnosed with stage IV breast cancer at 55 a month later. Our family was lucky enough to shuffle things around and get her back and forth-to-treatment, sometimes spending seven or eight hours on the road in a given day. But during that time, we also saw people sitting around for hours: imagine going through chemo and then having to sit there for four hours. 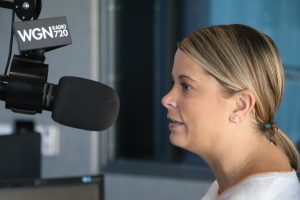 Scott: You talked about the inspiration from the family side, but you’re passionate about solving these difficult problems. What got you to a point where you decided to start Kaizen?

Mindi: I started my education very clinically: I’ve always been drawn to healthcare, I studied pharmacy and anesthesiology before deciding not to practice, and then fell into the startup world. A lot of my friends were getting jobs at large companies — that was the cool thing to do back then. And I was like, I’ll go work at this startup while I’m going to grad school, and then fell in love with the idea that at a small company or startup you get to do a lot. You get exposed to a lot. I grew up very quickly.

My first startup after I moved to Chicago was Homemade Pizza Company. It was a fantastic opportunity. I was their first HR manager and we were growing like crazy, and I knew nothing about that. But here I was, 23 years old, and hiring people, doing payroll, benefits, setting up new stores in different cities, and learning all the compliance rules.

It’s not easy: even sort of growing up in the startup world, and seeing all of the ups and downs and craziness, I still don’t feel like I was prepared —  which was a good thing, because had I known what was going to happen over the last three and a half years, I would have been like, hell no, I’m not doing this.

Thankfully I’m pretty easygoing. You fix it and move on, and if you don’t have the right fix you go back and try again. The plan was for my husband to work and let me do this. And then his company got acquired and he got let go. We ended up blowing through our savings, went $50,000 into credit card debt twice. Went without health insurance for a year, stopped paying our mortgage for six months. All the things where I’d said, we will not do this. There’ve been so many ups and downs that you’re like, is this gonna make it? Especially early on.

In the same day, you could be having the best day to start, and then by lunchtime everything’s blown up, and then after dinner everything’s back to good again. It’s an emotional roller coaster.