Cubii Caters to a Market Their Competitors Ignore

Cubii Caters to a Market Their Competitors Ignore

The struggle to get from work to the gym is real.

Arnav Dalmia realized that all but the most dedicated gym-goers find it challenging to fit in regular exercise. So he originally founded Cubii to make it easier to be active while at work. The company’s mission has evolved from there.

He first pitched the under-desk mini elliptical machines to the Technori Showcase in 2015, when the company was known as Fitness Cubed.

After launching with the intent of helping cooped-up office workers, Cubii quickly gained popularity with another demographic — one often ignored by the fitness industry.

“I started to get these phone calls from customers talking about how Cubii had changed their life, and they were not using Cubii at their desk, they were using Cubii for rehab,” Arnav says.

“We changed the mission of the company. Initially, it was workout while you work, now it is fitness for all ages, abilities and lifestyles.”

At the WGN Studios, Arnav explained what sets Cubii’s design apart and where the company is going next. An edited version of the interview appears below. 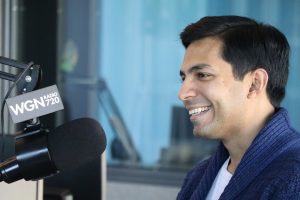 Scott: I would love for you to give us a recap on Cubii and what you’re doing.

Arnav: It’s a spin on the word cubicle. When we first pitched at Technori, I think the idea was certainly to help people at their desks stay more active and be more mobile while they were working. The more you can move during the day, the better for you. However, what we soon found out was that our target market was much broader than people working at a desk.

One of the things when you start a company that everybody tells you is, listen to your customers. And we took that piece of advice a bit too literally. Every Cubii box actually has my personal cell phone number and email address in it, so I started to get these phone calls from customers talking about how Cubii had changed their life, and they were not using Cubii at their desk, they were using Cubii for rehab. These were individuals who had limited mobility, who could not use any other kinds of fitness products, and that’s when we found a much bigger market opportunity.

In addition to helping people work out while they work, we found that this could be used for rehab for older adults, and we changed the mission of the company. So initially it was work out while you work, now it is fitness for all ages, abilities and lifestyles.

We call it ‘active sitting’ because if you’re sitting at a desk and not moving much at all, we help you to get that movement. And if you think about, again, older adults and people with limited mobility, they are spending a lot of time on their couch watching television, knitting, reading a book, whatever it might be. So it’s a great way for them to stay more active, especially when they have bad weather and they don’t want to go out for a walk on an icy street.

Scott: Is it still primarily cubicles? What would you say is the market divide? 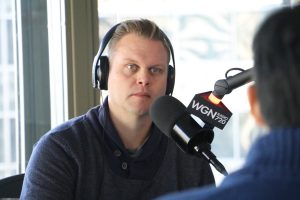 Arnav: About 30 percent of our customers use Cubii in their office, and 70 percent are people using it for rehab and limited mobility. What we found was that people who work at an office have a number of options when it comes to fitness: they can go to a spin cycle class, a yoga class, a bootcamp. However, with the senior population, they cannot go for a spin class, they cannot go for the bootcamp. There are very limited options. So in the office environment, Cubii is more like a vitamin: it’s a nice-to-have if you want to take the additional step to be more active. But for the senior audience, Cubii is more like a pain killer where they don’t have any other option. This truly changes their lives.

Getting into the numbers

Scott: How do you compare the physical effects of using this for a couple of hours five days a week, versus if I went to the gym every morning and did a full bike ride or whatever?

Arnav: It’s a great question. You burn about 150 to 260 calories per hour using the Cubii: however the real impact of it really depends on how much you use it. We’ve seen customers who were never able to walk because they did not have any strength in their legs start walking again. We’ve had customers that would use a walker, and they’ve discarded the walker because now they can walk without one. We’ve had customers that have lost anywhere between 15 to close to 100 pounds over the course of a year. And that’s because they use it so often — I think the real impact of it really depends on how often you use it, but you can see pretty exciting results if you use it often. 89 percent of our customers use their Cubii three times or more in a week.

Scott: How many hours a week would you say is a good number?

Put on your consumer hat

Scott: There are a handful of office desk fitness products, and they’re all pretty shitty because the designers are fitness buffs and they don’t understand how to fit it into the office, and they’re only trying to pad their pockets. Not only do you know the office component, you’re also solving how do I make you healthy? There is an opportunity because you understand the user differently. 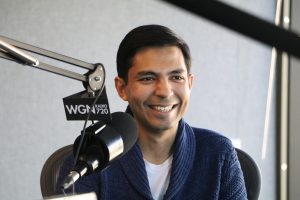 Arnav: Exactly, and I think that’s largely contributed to our success to date. I think oftentimes fitness companies think as product designers or engineers, they’re not thinking as consumers. So I think what’s really been different for us from the start is thinking of ourselves as consumers. I don’t have a fitness background; I’m not an engineer; I’m not a designer — I’m just a consumer. I put on my consumer hat and started to think about, okay, what is it that I as a consumer would want? And that’s what went into making the product. It’s really highly reviewed, we’re 4.5 stars on Amazon. It’s between $249 and $349 — we offer two models right now. I think it’s because we started thinking as consumers, not as designers, and that’s gonna be our mindset going forward as well.

Scott: What do you feel like you could build on to this, or add to this?

Arnav: That’s a great question. Right now we have a software layer that allows people to keep track of their progress, and if they have a Fitbit or Apple Healthkit, they can connect to that so all their data is in one place.

The opportunity we see in terms of new products is addressing other areas of the body where again you don’t necessarily need to put on your gym clothes, your sneakers, and go to the gym. What are some other ways in which we can integrate more movement into your life? One of them is balance training, because as we think about people getting older, one of the things that starts dwindling is your balance. So that’s the next category we want to address, by coming up with products that help you easily get an improved balance workout at home or in the office.

Our goal is to make a couple of very basic, very simple products that people of all ages, abilities and lifestyles can use, because right now we’ve found that a lot of companies are just trying to do something similar to what Peloton is doing — since Peloton’s been such a big success — however, there is a large section of the population that’s been left out of that. How do we integrate fitness into your life? How do we make it more accessible, more seamless? And that’s the market that we are trying to capture in the fitness world.

It doesn’t need to be a number of products: even if you look at Peloton, it’s just two products right now. We want to focus on making a couple of products, designing them from scratch, making them beautiful, making them easy to use, and giving people an option to work out however they find it convenient.