This CEO Grew His Company to Become a $1.6 Billion Market Leader. Now He’s Written a Book on the Anatomy of Innovation

This CEO Grew His Company to Become a $1.6 Billion Market Leader. Now He’s Written a Book on the Anatomy of Innovation

When Chuck Swoboda was hired at electronics manufacturer Cree in 1993, household light bulbs came mostly in two flavors: incandescent and fluorescent. The company had just gone public and generated just over $6 million in annual revenue.

But the product that would grow the company into a $1.6 billion global market leader –– the LED light bulb –– were virtually light years away from becoming a popular, affordable option.

Even when he took on the role of CEO of Durham, North Carolina-based Cree in 2001, LEDs were a hard sell.

“Everyone told me that nobody would buy them,” Chuck says. “Lighting companies told me we’ll never need them because what they had was good enough.”

But “good enough” isn’t in Chuck’s vocabulary. By the time he left Cree in 2016, Goldman Sachs reported that “the rapid adoption of LEDs in lighting marks one of the fastest technology shifts in human history.”

Today, Chuck splits his time between Cary, North Carolina and Milwaukee, where he serves as the Innovator-in-Chief at his (and Scott’s) alma mater, Marquette University and hosts its “Innovators on Tap” podcast.

“I’m a retired CEO. Some might say ‘recovering CEO,’” says Chuck. “After 65 earnings calls, you need a break.”

He’s not exactly resting, though. He serves on the boards of four companies and runs Cape Point Advisors, the consulting firm he founded in 2017. Chuck’s forthcoming book, “The Innovator’s Spirit,” drops in May 2020. 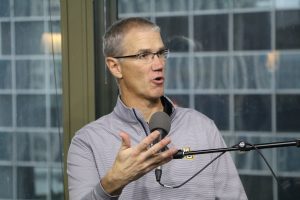 Read on for an excerpt of our interview, including Chuck’s insights on education, leadership and what executives can learn from an NCAA basketball coach.

Scott: You said something before we began the interview that we should shout from the rooftops: “Entrepreneurship and innovation is a way of thinking.” It’s not a title. It’s not a thing you do. Let’s talk a bit about your understanding of innovation.

Chuck: Well, what is innovation? Doing something that’s never been done before. Typically you’re going to solve a really hard problem. And in the end, to make it relevant, you’ve got to create some value. You need those three elements.

How do you learn to do that? It’s not about teaching someone how to get one “right” answer. By definition, when we pursue innovation, we don’t know what the answer is. We need a different way of thinking about it.

You can’t actually learn how to deal with failure if someone keeps helping you succeed. We should be pushing [entrepreneurs] to fail. The best ones will learn to overcome. Resiliency is a learned behavior. 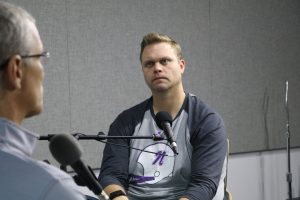 Scott: What drove you to write “The Innovator’s Spirit”?

Chuck: I gave a speech at Marquette about my experience leading Cree. Afterward the Dean of the College of Engineering and the person who runs the university’s leadership program said that I talked about a lot of things that [other business leaders] don’t. They asked me to look at one of their courses.

So I audited it privately. I read everything and I went back to them and said, “this stuff won’t work.”

Most of it came from large business schools … a kind of recipe for innovation. Follow these steps, you’ll get there. And I’m like, I lived it. It doesn’t. I competed with companies that tried that, and they’re not in the business anymore.

The folks at Marquette responded: “you need to write a book so we can use it.” And it was the first time I ever actually thought about what we did at Cree. If we had this conversation when I was still CEO, I couldn’t answer most of your questions because I hadn’t thought about it. I just did it.

Now that I’ve had a chance to step away, I’ve been able to explain what [success] looks like and take it apart, which has been super interesting for me.

Scott: I’d love to know what you’re doing as Innovator-in-Residence and how you view the opportunity to help shape students at Marquette.

Chuck: We have a disproportionate number of CEOs who come from Marquette … even though we don’t have the same network as Notre Dame or an Ivy League school. I think it has something to do with the Jesuit education. You’re developing how you think. I’m an engineer, but I took classes like philosophy and theology ––  thought-process classes. 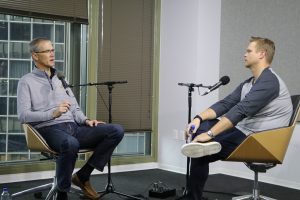 And the fact that you don’t come out with a “built-in” network makes you work harder, frankly. When you don’t have people help you along, you figure it out.

Success happens at Marquette, but it seems almost unintentional. So we added new programs, including an undergraduate leadership development program in the College of Engineering. It starts out with leading yourself –– really understanding who you are. Then learning how to lead others, which has everything to do with you and nothing to do with the others.

We’re still in the early stages. We want to eventually engage a more multidisciplinary approach, which generally doesn’t happen. You sit in your college silo, but you graduate and it’s all multidisciplinary. You learn a lot more by leading people who aren’t like you than you do leading those who are like you.

Scott: We talked about what you looked for in employees. What are the attributes and traits that new college grads don’t have? And what do they have that we can nurture and that will differentiate them in the marketplace?

Chuck: Knowledge is the least valuable thing we can give them. Artificial intelligence is going to completely automate the acquisition of knowledge. But we can’t automate creativity and compassion. I think those are things we can teach.

Today, college [curricula] is roughly 80 percent theoretical and 20 percent experiential or applied. I think a decade from now it will be flipped, for two reasons. One, it’s what the market demands. And two, if you look at higher ed as a business, it’s going through radical change. It will force us to ask what employers value … which is increasingly people with applied knowledge. Because that’s the stuff that’s hard to do.

Scott: Let’s talk about the podcast and what you’ve learned from that experience.

Chuck: There are innovation conversations happening every day. When I was writing the book, it bothered me that everyone thinks innovation is a tech company thing. But I know so many people with this mindset doing innovation that doesn’t look like tech. The podcast creates a forum to have conversations on all kinds of subjects.

I interviewed the Marquette men’s basketball coach, Steve Wojciechowski. Because innovation affects the game of basketball. As those rules change, if you don’t innovate, you get fired.

As I talked to him, it dawned on me: I’m sitting across from someone that knows more about recruiting than anyone I’ve ever met professionally. His entire career is based on the idea of convincing people to come play for him.

I realized that there are common themes among successful people across many different fields. It’s not about what I did to make Cree successful or what it takes to be a good basketball coach. It’s about how we’re thinking. Because if you can embrace a thought process, you can apply it to anything else. I break it down into pieces that can be reused over and over again.

I’ll be honest, it’s a lot easier to be interviewed than to be the interviewer. As public company CEO, you’re press-trained. Do enough interviews and you learn to say nothing.