Beyond being a fun distraction at the gym or on your commute, podcasts are gaining recognition as an engaging and accessible business tool.

While it’s easy to get started, it’s hard to make a podcast good, which is why professional podcast production agency Dante32 is flourishing.

Founded in 2018 by CEO Griffin Caprio and CSO Jenn Dudley, Chicago-based Dante32 helps businesses create podcasts in a style and format that resonates with their specific audience.

Brands and companies compete for our attention through copious amounts of visual content —   audio is not only easier to process, but it also feels more personal. “We’re inundated with content and information, but people want to have a deeper connection and want to have a human element, and there’s a way of delivering that via voice,” Jenn says. “What’s now become the common trope around podcasting is you feel like you know them, they’re in your ears.”

This isn’t just turning on a microphone and monologuing about why your company is the best.

“It’s understanding and meeting your people where they’re at, and not being too dogmatic,” Griffin explains. “People are listening to you because they want to be entertained, they want to learn something, they’re trying to improve something. Make sure that you understand that.”

Jenn and Griffin visited the WGN Studios to explain how they lead companies through production, the secret to making a successful branded podcast and how audio could change the future of advertising.

Here’s an edited transcript of their conversation. 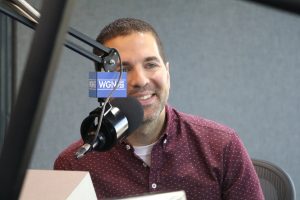 Scott: I’d love to learn the origin of Dante32, and what is it like working with the companies you work with?

Griffin: The company got started in the middle of 2018. Jenn and I had just left the company we were both working at, and we aligned ourselves with this idea of doing something in the media space, particularly audio, because we both are passionate about media. We want to see good companies succeed without just trying the same things over and over again.

We got our start knowing we were going to be in the audio and podcasting space, but not really sure what we were going to do. It took a couple of months of trial and error to figure out the right mix of product and services, to find something that people needed that we could do, that they would pay for.

We tend to work more with businesses and brands on the marketing/customer, education/brand awareness side. The National Restaurant Association is probably one of our largest [clients]: we just finished their first podcast doing interviews with their fast casual group. It’s meant to be consumed internally but it’s not private — although we are seeing a rise in private podcasts.

Scott: What drew you to podcasts in particular?

Griffin: There’s a reason humans use audio before reading and writing. It’s traditionally been an underserved medium: more on the consumption side, with music and stuff like that, but especially on the creation and interaction side. I think it starts with podcasts, but I think it quickly moves into personal assistants, autonomous vehicles. With people being more mobile, audio is going to become a bigger and bigger component.

Jenn: I think part of it is that we’re inundated with content and information, but people want to have a deeper connection and want to have a human element. There’s a way of delivering that via voice, even more over audio-only than over video, because there’s no other distraction.

How to make a compelling podcast 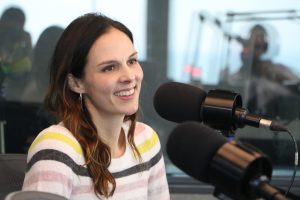 Scott: How do you work with companies on integrating a podcast and building a more diverse digital presence?

Griffin: It starts with having a content strategy. We end up spending a lot of time with our clients on the strategy piece, and less on the audio side.

We take our clients through a simple sentence [exercise]: my content is where who comes to learn what so that they can what?

Even just saying that, and finding out why people should care, why people should listen, why should they buy from you as opposed to any other company, and really walking them through that and asking the hard questions — not just the marketing speak, because nobody’s going to listen to that.

You’re talking to humans, and if you can just figure out what are you passionate about, why are you here, what gets you excited in the morning, you can find some way to channel that into something that they’re excited about and they want to talk about.

Scott: How do you determine what format is going to best suit each company?

Griffin: We look at budget, we look at capabilities and we also look at difficulty. We have clients that come to us and they’ll be really focused on doing a weekly hour-long show, and we’ll ratchet them back to say, aim for something that you know you can commit to for six months. Any good content play, whether it’s blogging, social media, video or audio, consistency over the long run is worth more than production value and all this other kind of stuff.

I would also add that understanding and listening to your [audience], listening to your customer, and let them tell you this is what I’m engaged with. People come to us and ask, what’s the optimal length for a podcast? And we tell them, we’ve seen podcasts that are three hours long, we’ve seen podcasts that are five minutes long, and both of those can resonate with different audiences. It’s a matter of understanding and meeting your people where they’re at.

People are listening to you because they want to be entertained, they want to learn something, they’re trying to improve something. Make sure that you understand that, and don’t just rattle on like, I’m so great and this is what we’re going to tell you.

Scott: Where do you see things in audio design going in order for this to become a masses thing? What’s missing? 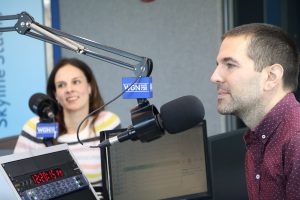 Griffin and Jenn are cofounders of Dante32

Griffin: Right now, whenever anybody has a question, they load up their phone and they go to Google and they say, Google, what’s the best restaurant? And that is a multibillion-dollar business, selling ads on top of those results.

Imagine a world where a significant percentage of those queries aren’t being made on Google.com, but are being made to a device. Now, suddenly, instead of 10 search results coming back, you’ve got a single answer: it’s this. The big question is, what does that do for monetization for Google’s business, and all the auxiliary businesses like the Yelps and the TripAdvisors, and all those other search-based areas with traffic? What does that stimulate? What kind of behavior does that start to open up, and what areas for commerce does that open?

Audio SEO, audio conversion, all of these things that are taken for granted with the surface area that you have on your web browser, are now suddenly going to be whittled down to a single.

Scott: What can I do to get ahead of the marketplace?

Jenn: The biggest thing is to create content that is worth listening to. And you want to own that relationship. At the end of the day, you want to build a connection with whoever your target audience or consumer is. They need to be able to discover you, know who you are, and then frankly care about who you are and why they would want to buy from you.

I think we’re increasingly seeing that with consumer behavior — there are two ends of the spectrum. Maybe it’s price sensitive, and that’s a different game — you can do a race to the bottom. Or they care about the company that they’re buying from, whether it’s services or products, so they want to know the story behind that. That’s hard to convey in any ad, in any medium. The alternative is to create your own content: you own the relationship, you effectively become your own sort of media company.

But you have to have something worth saying, and have a value and intention behind what you’re doing as a business. And that’s one of the things that can be done well with a podcast as branded content, and why we are in this space.