Expanding your business often requires traveling, and the bigger you grow, the more often you and your team will be on the move. But travel can be stressful —  wasting time on inconvenient commercial flights and long car rides isn’t just tedious, it can be a drain on your resources and cost you time.

Airshare offers a more affordable way to benefit from the convenience of a private plane. Unlike competitors, you buy days rather than hours, which can be more economical. Plus, the pilot and jet stay with you the entire time, so last-minute schedule changes aren’t a problem and you’re never left stranded.

The company also ensures the time you spend in the air can be as productive as possible. “Our planes are equipped with wifi, so you can make calls, do all your emails, do whatever work you may need to,” says John Owen, who has been with Airshare since 2016, and recently became president and CEO. “You’re saving time, and then the time that you have on the airplane is also unbelievably productive.”

Airshare isn’t just for the Fortune 100. “With the types of airplanes we fly, it’s a lot more economical to get into if you’re a company starting to build your brand,” John explains. He visited the WGN studios to discuss changing perceptions of private jets, the benefits of an office with wings and how to get the best value from your flights.

Getting off the ground

Scott: Tell me a little bit about the origin of Airshare. 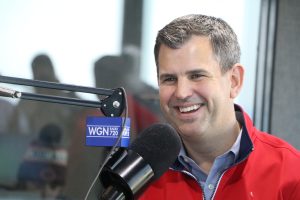 John: Airshare has been around for about 20 years. It was a handful of smaller airplanes that started out of Wichita, Kansas, primarily as a business tool, and has slowly grown up from there. We’re currently in the Midwest, Oklahoma, Texas. We just expanded up into this region with Chicago, Louisville and Milwaukee. We’re not quite as big as the other guys, but we’ve got a lot of room to expand. We’re looking at really getting the business going, and growing it from here.

We get some cases where somebody is about to pass away and their loved one cannot get there commercially, and so we’ll scramble around to find them an airplane to get them where they need to go.

Then there’s some of the more fun things: we developed a partnership with Patrick Mahomes a couple of years ago, and he has been a great customer of ours. He uses it for personal and business travel, to his other sponsorship events. He couldn’t be a nicer guy. Tom Watson has been in a long time partnership with us. So yeah, we get to meet a lot of fun people.

Scott: We’ve seen the price of a trip for eight to 10 people come down significantly, and I think private jet travel is going to be big moving forward.

John: We agree. It’s always had a bit of stigma to it, but with several of the new interests that have come over in the last several years — Wheels Up and many others — you’re starting to see that go away. You figure out that it’s a really good productivity tool. It’s not just for the luxury travel to their vacation house —   with Airshare, most of our customers are businesses. 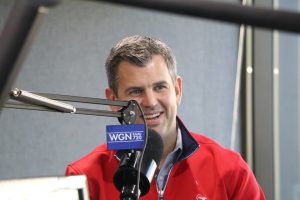 We’ve got a customer that I was talking to the other day who takes a trip out to California for a one-hour meeting and it takes them three days, because they’ve got to fly all the way out commercially, drive two or three hours to the location that they’re going to. By then it’s nighttime, their meeting is the next day, and they’ve got to turn around on the third day and do all that all the way back. We ran that for them and it’s a nine-hour trip: they can leave in the morning and make it back for soccer practice.

Scott: How does the price compare?

John: Usually, the more committed the customer is, the better the rate they’re going to have. There are several charter companies you can call up and get any airplane you want. That’s typically the most expensive, because it’s a one-off and there’s no commitment.

Then you get into the jet cards, where you may be putting a chunk of money down, committing to a number of hours, a number of days, and then the price starts dragging down.

Welcome to your boardroom in the sky

Scott: I understand why this sounds like a rich person’s problem, but the reality is that the time is very expensive.

John: Time is everything. It’s often hard to justify by pure cost, but you get time savings, and they’re essentially boardrooms in the sky. Our planes are equipped with wifi, so you can make calls, do all your emails, do whatever work you may need to, so you don’t lose any productivity. You’re saving time by not going through TSA, and not having to get the rental car and drive two to three hours to your location, because private airplanes can get to 10 times as many airports than you can commercially. 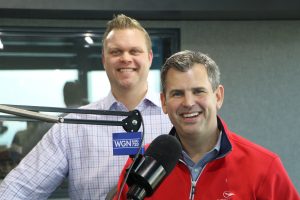 Scott: I think the new evolution of air travel is sub-branding. You can make the most luxurious experience ever, or you can go in a Cessna flying across rural Iowa.

John: And it’s not all or nothing. We have customers with significant shares in airplanes with us that quite often take commercial airlines when it makes sense. If it’s one person going directly to a location, that person may decide to just hop on a commercial airline. But we do a lot of franchisees, universities for recruiting purposes, banks, insurance companies and construction companies where our model really works well because we sell days. That’s the big differentiator between Airshare and everybody else who sells hours. A share in Airshare is 20 days, and you can use as many hours as you want.

The plane and pilots also stay with you all day: that’s another differentiator. I live in Kansas City, and say I’m going to Colorado for a meeting for the day, and I think it’s going to take me all day and at five o’clock it’s going to be time to come back. Maybe the meeting goes quick and I’m done by noon, I just call the pilots and say we’re ready to go. Pilots say, OK, we’ll be ready in 30 minutes, and you’re back home.

Scott: How do you decide on who you’re going to serve?

John: We also operate smaller four-seat to eight-seat jets, so it can be more of an introductory product. We deal with a lot of entrepreneurs who have built businesses that have grown significantly and their time has become a lot more valuable, or they’re expanding into new territory. With the types of airplanes we fly, it’s a lot more economical to get into if you’re a company starting to build your brand.

What we like to see is that stairstep customer. If you only need a couple of days, or you need 10 days, we’ve got a small airplane that’s going to be the most economical fit for you. And as you grow into further territories that take you out to the coast or wherever it may be, we step you up into those products as needed. But it can be a very good tool for somebody that’s just now building a business, whose time has become much more valuable.