This episode is sponsored by Home Chef. Weekly recipe rotations for all skill levels means there’s always something delicious to cook. Click here for $100 off with code TECHNORI100

When the main players in a market are fighting over scraps, it’s time to get into a different “game.”

Instead of muscling in on the crowded restaurant-to-home delivery space, FanFood co-founder and CEO Carson Goodale looked for hungry people elsewhere. He found them in sports stadiums.

Sports fans at live games can use FanFood to order food and drinks from their phones instead of waiting in long concession lines. You can pick up the snacks yourself or have them brought right to your seat.

“I saw the sports and live entertainment space as a completely untapped market,” Carson says. “So we started there. We’re in 75 venues, quickly approaching 100, from high schools to Division I colleges.” And they’re hoping to break into the big leagues.

Carson credits his military background with his organizational skills —  and the opportunity to grow FanFood. After enrolling in the Reserve Officers’ Training Corps (ROTC) in college, then serving in the National Guard, Carson balances CEO duty with military duty as a Detachment Commander in the Army Reserves. Carson’s veteran status led him to Bunker Labs, a nonprofit founded in Chicago’s tech startup hub 1871 that now operates nationwide and helps veterans and their spouses start businesses. 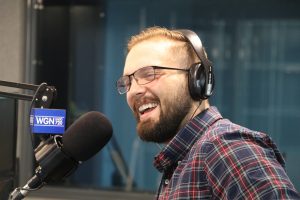 Five years since he came up with the idea in a college bar, FanFood has become what Carson describes as “a real business.” It’s so real he’s even fundraising right now.

Carson joined the podcast to talk about how bad bar service inspired his app, how military training translated to entrepreneurial life and what it’s like to see your scrappy idea become a functional business.

Why FanFood is a winner

FanFood is going to change the way fans get concessions because one, FanFood is a more convenient way of ordering. No one likes waiting in line and it’s a frictionless ordering experience. And two, on the other side when you’re managing, you’re just focusing on fulfillment. It’s an easier and more efficient way to manage your concession operations.

We’re coming to the table with a system that can support those needs. We offer express pickup and we can do in-seat delivery. We’re rolling out the ability to do premium suite ordering so you can order more stuff or call for a server.

The first good thing to come from bad bar service 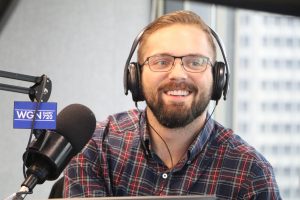 I was complaining about a shitty experience I had at a bar with some of my buddies at the University of Iowa. I said, we shouldn’t have to navigate through this crowded bar to order a drink. We should be able to order it on our phone and have a server bring it to us. Especially at the time, when there was a lot of growth with respect to online and mobile ordering and in this economy, where convenience is an expectation.

We started there and carved out our focus. We’re in 75 venues, quickly approaching 100, from high schools to Division I colleges.

From dad’s basement to Bunker Labs

I came up with the idea of FanFood my sophomore year in college. I graduated and I went on active duty to learn how to do my job in the military, because I’d commissioned as an officer in the reserves.

I did that, came back and decided I was going to take FanFood full time. I was in my dad’s basement for eight months and decided I needed to move out and build my own network, build relationships, find investors and leverage the resources you get from a big city.

I moved to Chicago close to three years ago. My excuse was Bunker Labs. I reached out to then Executive Director Justin Walker. At the time, we were at one high school and had just started piloting. They were like, you can work out of 1871 for free.

Our first angel investor who wrote a $15K check was another veteran who was referred by Bunker Labs. Our first competition that we won was also because of Bunker Labs and we did their one-day-a-week accelerator. I like to brag that I’m one of the OG Bunker Labs stories.

Running a business with military planning 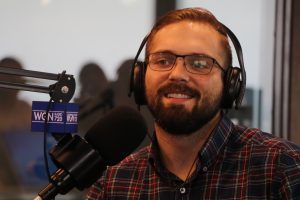 Most of the skill sets that I’ve learned in the military translate super well. When it comes down to effectively planning, one of the biggest things is identifying all the risks in this potential mission and what are you doing to mitigate all of those pre-identified risks?

Also, we’re at a point now where every week we’re closing deals but we’re also losing deals. We’re tracking that so we can say, why are we losing deals?

When the pipe dream becomes reality

We have over 30 full-time employees and we’re carving out departments. We have a marketing team, a sales team, a tech team. We’re building out operations. We’re unfucking our finances. We’re becoming a real business.

If there’s one thing I would brag about, it would be our team. There’s so much positive energy and helping each other. It’s really fun. It’s a really exciting time. Once you solve the money issue —  once you get your fundraising — it comes down to people management. If you ask 10 different founder entrepreneurs, give me an issue right now, if it’s not cash it’s people.

This episode is sponsored by Home Chef. Weekly recipe rotations for all skill levels means there’s always something delicious to cook. Click here for $100 off with code TECHNORI100