How Patreon fosters deeper connections between creators and their fans

How Patreon fosters deeper connections between creators and their fans

The internet has radically changed the music industry. Artists used to have to sign with a record label to get their music heard. Now, platforms like YouTube and SoundCloud enable artists to push content directly to their audience — no third party required.

But there are major downsides: advertising and algorithms. Since music sharing platforms are dependent on advertisers for revenue, content that doesn’t align with ads is often demonetized. And since visibility is controlled by an algorithm, creators have no control over whether or not an audience will actually see their content.

Sam Yam, co-founder and CTO of Patreon, set out to create a platform to bring power back to the creators. Patreon hosts exclusive communities where artists can push content to fans and in turn, fans can directly support their favorite creators.

Sam joined the podcast to share his vision for Patreon, the faults he sees with other platforms and advice on how to foster healthier and more genuine communities.

A radical shift in the music industry

At Patreon, we’ve radically changed the way in which creators interact with their communities. We see ourselves as a platform for creators to get paid in an ongoing, sustainable fashion. They get paid through their community every month, usually in return for access to exclusive content or access to the community itself.

This resembles a radical shift to the traditional model. Previously, if you were a musician who wanted to enter the music industry, you’d have to sign on with a third party who’d help you with marketing and promotion. That was the only viable path at the time.

And then once YouTube launched, creators realized they could earn a living from posting their work on the platform. However, the main monetization mechanism was all based on advertising. The goal was to get as many views as possible, not to produce content that would necessarily be the most compelling.

We realized there were a few major problems with this model. First, there was no telling how much you’d rake in from advertising. You could have videos with millions of views, but still only earn a few hundred dollars in revenue.

And, as my co-founder Jack [Conte] realized, it didn’t matter if people cared about the content you were generating — what really mattered was if YouTube’s algorithm was pushing that content to its viewers. So we set out to build a platform that allows fans to connect with a creator and pay them for the work they’re doing.

In the beginning, we reached out to 50 prominent YouTubers and all of them said no. We realized people weren’t convinced that Patreon’s model made sense or that their community would actually pay them.

Our first ever Patreon member was actually my co-founder Jack, who is a musician. He launched his Patreon community to his own YouTube audience, and to our surprise, he was earning several thousand dollars per song. After that, creators started finding our platform organically. 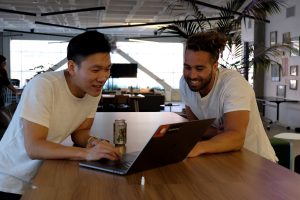 engagement. This creates all sorts of adverse effects for creators. For instance, YouTube has recently demonetized creators whose content didn’t align with what advertisers want to see. So creators suddenly saw that they couldn’t make the money they originally had been earning from advertising.

Furthermore, you can’t reach out to your entire audience on these platforms. Even when you send a message to your viewers, you’re dependent on the platforms’ algorithms to determine whether your message will appear at all.

Forging a deeper connection between artist and fan

Our goal with Patreon was to create a more intimate relationship between creator and fan. The idea was that you can always own your audience and the messages you send will go to everyone who’s part of your community.

Because of this, we’ve seen quite a few improvements to the artist-fan relationship. First, we’ve seen much healthier communities. And second, the conversation and engagement in these communities is much richer and more genuine than before.

Creators on YouTube frequently think about appealing to the algorithm rather than generating content that appeals to their audience. They’re incentivized to lead with a “gotcha” headline that increases views, but doesn’t lead to more engagement.

We’ve found that Patreon leads to much purer content — that is to say, content that’s a better representation of the creator’s intent than the filler content optimized for the business of audience building we’ve seen on other platforms.

Lately, we’ve seen a lot of creators generating content out of the scope of their normal creations. For instance, there’s a heavy metal musician on Patreon who has recently started sharing her poetry and paintings with her audience. Her audience loves it because it gives them an opportunity to forge a deeper connection with her, and gain a glimpse into her creative process.

One of the big areas we’re currently focusing on is how to best support our communities. We want to foster a richer connection between artist and fan. There’s a notion that to make a living as an artist, you only need 1,000 true fans.

So we’re really incentivizing artists to generate the content they want to produce, rather than what these other platforms monetize.

We’re building tools that allow for what I call scalable intimacy. We’ve made it easier for communities to vote on top questions for artists to answer and initiated live sessions that allow artists to give fans a glimpse into their creative process.

Our ultimate goal is to foster healthier communities that encourage deeper human to human connection. In that way, we can encourage artists to create purer content that their fans want to see.