Coronavirus Has Revealed Just How Broken Our Information Ecosystem Is

Coronavirus Has Revealed Just How Broken Our Information Ecosystem Is

The only way to fix it is to support professionally-reported, trustworthy journalism outlets.

The coronavirus pandemic has been a sobering reminder about the fragility of human life and modern civilization writ large. Valuable institutions we typically take for granted — our medical system, public transportation, our food supply chain — have been severely affected or brought to a complete halt by this crisis.

But it’s also been a terrifying reminder of how fundamentally broken our information ecosystem is. The coronavirus has exposed structural problems in the tech and media industries that allow for the widespread dissemination of misinformation, bad faith debate and, in some cases, outright lies. 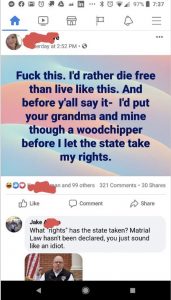 All across the world, communities are being ravaged by the corona epidemic. Doctors in Italy are having to make unimaginably painful decisions about who to save (and who to let die) due to the insufficient number of ventilators there, for instance.

And yet all across America, and especially in my social feeds, there are Americans saying the crisis is overblown. Take, for instance, this New York Times article about a conservative Louisiana community where people on Facebook were openly mocking people for worrying about coronavirus. Then Mark Frilot, a 45-year-old lawyer, contracted the virus, and his wife, Heaven, spent the next several days educating her neighbors that COVID-19 is not a joke. In other conservative parts of the country, people are openly flouting social distancing orders, seemingly as a way to express their support for President Trump and his goal to end stay-at-home orders as soon as possible.

I’ve seen this troubling phenomenon play out on my personal social media feeds, too.

Out of curiosity, I used the Sprout Social tool to get a sense of how coronavirus news is presented on various prominent social media platforms. The results were unsettling, to say the least.

On Twitter, users were more likely to share articles from reputable news sources (surprisingly), such as The New York Times, The Wall Street Journal, and Washington Post, but the conversation about that news skewed toward being alarmist, and all the talk about the world ending (it’s not) left me feeling angsty.

My LinkedIn feed didn’t offer much in the way of hard news. Rather, it was filled with contributor op-eds from Forbes, Inc. and other business publications that didn’t include any original reporting. Many times, the author would cite a “good friend” as a source, which is hardly reliable.

The worst by far, though, was Facebook, where I’d estimate 60% of the articles in my feed were from obviously bogus sources — Facebook pages with names like Obama Watchers, Now The End Begins, or that are made to look like reputable news sites, but with slight alterations to the URLs.

The claims being made were even more absurd. One article claimed coronavirus is a biological weapon released by Russia and that’s why there are so few cases in the country. Another claimed the Obamas bought a controlling interest in Home Depot to stop the company from contributing to Republican political campaigns.

In reality, Russia is fighting coronavirus just like the rest of the world; large swaths of the country have been put on lockdown. And the Obamas have a reported net worth of $40 million — a few $100 billion shy of what’s needed to buy Home Depot.

Facebook, Google, Twitter and other prominent social sharing platforms have a responsibility to at least monitor the content being shared on their networks and to remove any obvious misinformation.

But we also have a personal and societal responsibility not to read and share this misinformation. It’s deeply troubling that so many people are gullible enough to believe these claims, but it underscores how important it is for the rest of us to support and promote real, fact-based journalism.

There are many ways to help fight corona, the most important being to follow the shelter in place order. You can also help by buying a subscription to The New York Times, Washington Post or any of the other publications that have journalists on the ground, literally risking their lives, to report on the corona pandemic and ensure the public has the accurate information it needs during this time of crisis.

The only antidote is information that’s professionally reported and rooted in truth.