‘The Last Dance’ Is Everything Streaming Content Should Be

‘The Last Dance’ Is Everything Streaming Content Should Be

Disney continues to show why it’s a serious contender for the top streaming platform on the internet.

The coronavirus pandemic has had a mixed effect on the entertainment industry. On one hand, streaming is through the roof as people look to pass the time while confined to their homes.

On the other hand, all new Hollywood productions have been put on indefinite hiatus, and sports are virtually non-existent with no professional leagues playing games right now. Which is part of the reason why The Last Dance is so damn popular right now.

The Last Dance, ESPN’s new 10-part documentary series about Michael Jordan and his iconic 1998 Chicago Bulls team, is dominating the pop culture zeitgeist much in the same way MJ and the Bulls did the Eastern Conference throughout the ’90s.

Part of this is due to The Last Dance being the only game in town. Sports fans are starved for content and the documentary is taking advantage of a barren landscape.

The documentary is also great in its own right and probably would have been successful had coronavirus never happened. People have been heavily anticipating this documentary ever since ESPN debuted the trailer this past holiday season.

But the documentary’s success is also because Disney, ESPN’s parent company, has developed a keen sense of what appeals to cord-cutters and how to generate social media chatter around their various streaming properties. And that has made Disney a viable contender for the top spot in the Streaming Wars.

The first two installments of The Last Dance aired on Sunday, and from the moment it started, my Twitter feed was flooded with people meme-ing, screencapping and commenting on the film.

Me in the living room waiting on #TheLastDance to start tonight pic.twitter.com/e7uFaiyIYC

Me, trying to call for peace between LeBron and Jordan fans tonight #TheLastDance pic.twitter.com/qv6UZWU3JF

This is in stark contrast to Quibi, which has blocked people from taking screengrabs of its shows and sharing them online. The social media activity generated an untold amount of free marketing for The Last Dance, and it resulted in huge viewership numbers — in just one night, The Last Dance became the most-viewed ESPN documentary ever (and ESPN has made a lot of documentaries). Quibi, meanwhile, has yet to create any kind of viral excitement around its slate of shows.

ESPN wasn’t always good at this kind of thing. For years, former Disney CEO Bob Iger downplayed the effects of cord-cutting, saying ESPN was immune because of its investment in live sports programming. But ESPN proved just as susceptible to these shifts in consumer behavior as other networks, and the company had to lay off hundreds of employees, including some of its most recognizable talent, in the late 2010s to make up for losses in cable subscription revenue. 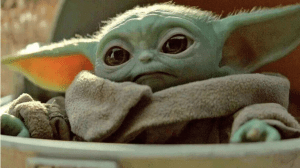 Now ESPN and Disney appear to be on the right track. Disney+, Disney’s new owned and operated streaming service, has been successful in large part because of social media buzz. Remember all the Baby Yoda memes?

ESPN seems to have caught on, too. Perhaps the smartest thing ESPN did with The Last Dance was move up its air date. The Last Dance was originally scheduled to go live in June, to coincide with the NBA Playoffs, but ESPN changed it to April to take advantage of the current lull in sports coverage.

It’ll be exciting to see how Disney builds upon these successes. Not only does Disney have Disney+ and ESPN, it also has Hulu, which it acquired last year for nearly $6 billion, and it’s offering all three services in one comprehensive streaming bundle.

Will that package be enough to compete with Netflix for streaming content supremacy? Who knows. Netflix continues to churn out original programming hits of its own. But Disney’s strategy seems on point at the moment. It reminds me of another fierce competitor I watched in the ’90s while growing up in Chicago.