We’ve (Finally, Officially) Pivoted to Video Because of Quarantine

We’ve (Finally, Officially) Pivoted to Video Because of Quarantine

Digital video has exploded during the pandemic, to the point we may be at an inflection point for the medium — except for Quibi.

You probably missed it unless you’re one of those Extremely Online types who spends most of their time on Twitter, but the term “pivot to video” was a meme in the mid- to late-2010s (and not in a good way).

When you pivot to video, I pivot the hell away from your website https://t.co/LnXrFG59pB

Pivots to video were seen as craven, last-ditch efforts to pander to the algorithm gods at Facebook, especially for the VC-backed publications that needed to justify their comically inflated valuations.

Sure enough, these investments in video production didn’t deliver much of a return — even despite all the spammy, autoplay video ads — and “pivot to video” was a sad commentary on the state of digital media.

There were job cuts at BuzzFeed, Vice and Vox, all companies that invested heavily in video. Mic laid off almost its entire staff after it pivoted to video and then was acquired by Bustle in a firesale. Essentially the same thing happened with Mashable. The most egregious example may have been Fox Sports, which got rid of almost all writing on its website in favor of video content and then saw its traffic decrease 88%. “There is no evidence consumers want more video, and video production is expensive, logistically difficult and hard to scale,” reported the Nieman Journalism Lab at Harvard.

Turns out that statement is only half-true. Yes, it’s difficult to create high-quality video content. But consumers do want more video. They can’t get enough of it, in fact. The appetite for video content is insatiable, particularly during quarantine. It seems that the long-prophesied, industry-wide pivot to video is finally upon us. The only question is whether it will sustain after quarantine. 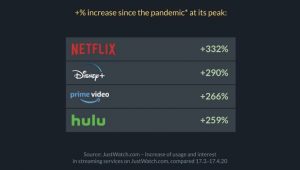 The major streaming platforms have seen streaming activity increase by several orders of magnitude during quarantine, according to streaming content search engine JustWatch.

The obvious exception to this trend is Quibi, the highly-anticipated streaming service that raised nearly $2 billion in venture capital and has yet to gain any traction after launching earlier this year. But that’s more due to Quibi limiting its content to mobile devices and preventing users from sharing screenshots of its shows on social media. It’ll be interesting to see if Quibi can turn things around now that the company has made its content available on other platforms.

The idea that video content needs to be highly-produced to attract an audience has also proven false. TikTok and Twitch are two of the fastest-growing video networks in the world, and their content is user-generated and rough compared to a Netflix original series. The content is authentic, however, and audiences respond to that.

It’s not just content consumption, either; video has infiltrated seemingly every aspect of our lives during quarantine. With offices closed, companies have embraced video conferencing platforms such as Zoom, which is arguably the biggest winner in the quarantine economy. Socially speaking, people are using video conferencing to stay in touch with friends, host virtual happy hours and conduct online book clubs. And the app Cameo, a platform that allows people to pay for personalized video shoutouts from celebrities, did its best week of sales two weeks ago and its bookings are up more than 500% since stay-in-place orders began, says CEO Steven Galanis.

People who were previously uninterested in video technologies are embracing them and now that they are the only options for connecting with their colleagues, friends and far-flung family members.

The current pivot to video seems permanent due to the unique circumstances of the pandemic. People are confined to their homes and eager for distractions (e.g. Netflix, TikTok, Twitch and YouTube). They’re equally eager to see their friends and family members, even if it is through a video app interface. And they want authentic, novel experiences during this period of unprecedented uncertainty (like with Cameo).

This suggests the pivot to video will continue beyond the pandemic. Historically, catastrophes often cause fundamental changes in media consumption. Post-World War II prosperity gave rise to rock ’n roll (and pop music more generally). The assassination of John F. Kennedy cemented television as the primary news medium. The O.J. Simpson trial popularized talking head broadcast journalism. And 9/11 ushered in the 24/7 news cycle and the birth of headline-driven, clickbait journalism. (These weren’t all positive developments.)

We can expect a slight regression in video activity once lockdown orders are lifted and people are able to enjoy their summers outside. But it seems like the era of digital video dominance is only just beginning.